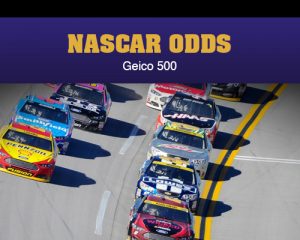 When we talk about how there is constant betting action is because there are great sporting events taking place that don’t normally receive as much attention as they could, at least from punters who are willing to make more betting profits.
The NASCAR season runs nearly year-round and gives sports bettors the option to bet on an overall season champion, individual race winners, and head-to-head driver props. The NASCAR season kicks off with the Daytona 500 and continues with big races like the Coca-Cola 600, GEICO 500 at Talladega, and Bank of America 500.
The NASCAR Sprint Cup Series will speed in to Talladega, Alabama and the Talladega Superspeedway for this week’s GEICO 500. The Talladega Superspeedway is the biggest and fastest track on the NASCAR circuit. That is the biggest reason why this race can be so difficult to predict. Drivers will spend the entire race attempting to make a run to the front of the pack but all it takes is an unanticipated bump or rub to completely knock a portion of the field right out of the race. The anticipation and excitement at Talladega is almost unlike anything else when it comes to NASCAR. It will be that much more fun if we can find a way to win with our best bets for this week.
Get all the latest Sports Betting updates on your social media outlets. Find us on Facebook!
It’s important to know that most sportsbooks post their NASCAR odds at the start of the race week, prior to Sprint Cup series team qualifications and practice sessions. Once the week of qualifying and practice racing is complete, sportsbooks will then repost their odds on race day.
Most drivers will do whatever it takes to ride up front and avoid getting caught up in the “big one.” Brad Keselowski did his best to stay at the front of the pack last year when he captured his third-career win at Talladega Superspeedway. Last year’s race featured 37 lead changes among different drivers and ten cautions for 41 laps. We can expect similar numbers for what should be another wild edition of the GEICO 500 this year.
Past Five Winners
2016: Brad Keselowski
2015: Dale Earnhardt Jr.
2014: Denny Hamlin
2013: David Ragan
2012: Brad Keselowski
What To Know About The Track
The fact that this track is known for the “Big One” should be all the information you need heading in to this week’s race. The Talladega Superspeedway has hosted some considerable wrecks over the years including a memorable eight-car pileup in last year’s GEICO 500. Talladega is the longest NASCAR oval and that is why drivers are able to reach such high speeds. Experience will certainly count for something when it comes to this week’s race as drivers need to be able to tow the line between speed and control. NASCAR betting also offers sports bettors the option of future odds on who they think will qualify or win the Sprint Cup Championship. Sign up now at BetRegal.com