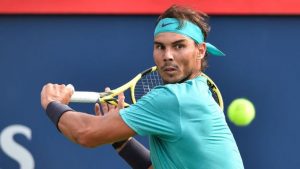 Rafael Nadal withdrew from the Cincinnati Masters for the second year in a row after polishing off his US Open preparation with a Montreal title on Sunday.
The announcement came a few hours after Nadal won his fifth Canadian title 6-3, 6-0 over Russian Daniil Medvedev.
The oft-injured Spaniard decided against playing any more before the August 26 start of the US Open in new York.
“I am very sorry to announce that I won’t be playing in Cincinnati this year,” Nadal posted on Facebook. “No other reason than personally taking care of my body and trying to keep as healthy as I feel now.”
Nadal said he explained his position to Brazilian Cincinnati tournament director Andre Silva, whom he said understood.
“I’m sure the tournament will be a success and I wish him and his team all the best,” Nadal said.
Nadal will go into the US Open with just one hard court warm-up, albeit his record-extending 35th Masters 1000 title.
Check BetRegal.com and find the best online betting site.
His late withdrawal leaves the Cincinnati draw severely lopsided, with top seed Novak Djokovic and number three Roger Federer positioned in the top half.
Neither of the pair have played since their Wimbledon final a month ago won by Djokovic.
Federer is bidding for an eighth Cincinnati title while Djokovic is the defending champion.
Nadal beat Russian Daniil Medvedev 6-3, 6-0 to record more history at the Canadian Masters 1000. It was the fifth time (2005, 2008, 2013, 2018) the World No. 2 has hoisted the trophy in Canada.
The 33-year-old leads the ATP Tour in wins this season with 41 (41-6) and is in first place in the ATP Race To London, an indicator who will finish year-end No. 1.
Get all the latest Betting and Sport News updates on your social media outlets. Find us on both Facebook and Google+
Nadal has three tour-level titles this year (Rome, Roland Garros). He is next scheduled to compete at the season’s fourth and final Grand Slam, the US Open, which begins 26 August.