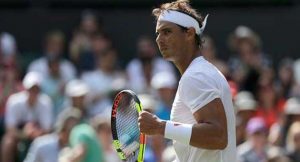 Rafael Nadal is confident he can be fit for the Australian Open as he chases an 18th Grand Slam title.
A right knee injury forced Nadal to retire from his U.S. Open semifinal in early September — his last competitive match — and the 32-year-old Spaniard had ankle surgery at the start of November.
Asked Thursday to assess his fitness level out of 10 ahead of the Mubadala World Tennis Championship in Abu Dhabi, Nadal said: “I don’t know. I am not that good with numbers.
“I started about two weeks ago and I am taking small steps forward. I am just making sure I am moving forward and it’s not a step backwards. I know I have time to be ready for Melbourne at 100 percent.” The Australian Open starts Jan. 14.
Nadal, who won his 17th Grand Slam at the French Open in June, said he was happy with his progress “but of course I need to prove myself in competitions and hopefully, playing here will help me take the first steps.”
Check BetRegal.com and find the best online betting site.
The exhibition tournament also features top-ranked Novak Djokovic, who had surgery in February for an injured right elbow.
“It’s been a very exciting 12 months. Last year here, I was still carrying the injury of the elbow that resulted in the surgery,” Djokovic said. “I am grateful that this season has taught me a lot about myself as a tennis player and as a person. I really had to dig deep to sort of turn the table in my favor.”
Djokovic, who raised his haul of major trophies to 14 this year with Grand Slam titles at Wimbledon and the U.S. Open, said his aims had changed.
Get all the latest Betting and Sport News updates on your social media outlets. Find us on both Facebook and Google+
“I feel I am not prioritizing success on the tennis court for the sake of success only as I used to do probably until about five years ago,” Djokovic said. “For me, tennis is more of a platform now for other things — for the values that I want to share and the messages that I want to give out to the young generation.”