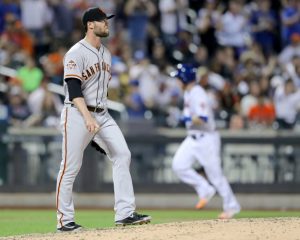 Hunter Strickland has a new home.
The former Giants closer has agreed to a deal with the Mariners, reports Ken Rosenthal of The Athletic. Though it’s a one-year deal, Rosenthal notes Strickland could remain with the Mariners for three more seasons through arbitration.
Strickland can earn $450,000 in performance bonuses for games as part of the deal announced Sunday: $75,000 for 25, $100,000 for 34, $125,000 for 45 and $150,000 for 50.
He can make an additional $875,000 for games finished: $50,000 for 20, $175,000 for 30, $250,000 for 40 and $400,000 for 50.
Strickland was non-tendered by the Giants in November. He went 2-5 with a 3.97 ERA and 14 saves last season while appearing in 49 games. The biggest headline Strickland made in 2018, however, was off the field.
After blowing a two-run lead to the lowly Marlins on June 18, Strickland punched a door and fractured his throwing hand. He missed two months due to the injury.
Check BetRegal.com and find the best online betting site.
Strickland became a free agent when San Francisco failed to offer a contract by the Nov. 30 deadline.
Mariners general manager Jerry Dipoto said Strickland “has the ability and the track record to be an impact reliever in high-leverage situations” for the team.
To clear a roster spot, right-hander Max Povse was designated for assignment.
In 2017, he made headlines when he hit Washington Nationals slugger Bryce Harper on the hip with a 98 mph fastball, which sparked a benches-clearing incident. It was the first time Strickland had faced Harper since Harper hit two home runs off him in the 2014 National League Division Series. Strickland was suspended six games by Major League Baseball for his role in the brawl, which ended with him being dragged to the Giants’ dugout by several of his teammates.
Get all the latest Betting and Sport News updates on your social media outlets. Find us on both Facebook and Google+
The real news from Strickland going to Seattle is we can cross the Mariners off the list of teams Bryce Harper could join.