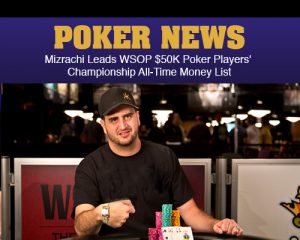 Find your daily dose of articles with our online poker news!
The $50,000 Poker Players’ Championship wrapped up on Wednesday at the 2016 World Series of Poker with Brian Rast earning his second victory in the event after he defeated a field of 91 entries and beat Justin Bonomo in heads-up play. Rast won just shy of $1.3 million for the win.
On the all-time money list for this specific event, Rast moved into second with $3.016 million in winnings, thanks to two cashes that were both wins. Rast’s other win was in 2011 when he beat a field of 128 players to win $1.72 million.
If you want to learn more about poker, don’t forget to visit our How to play section!
Here’s a look at all of the event’s champions dating back to the first installment in 2006:
$50,000 Poker Players’ Championship Winners

Ready for start winning at poker? Bet NOW!
As you can see from the data in the table, the best three years for the event were the first three, 2006, 2007, and 2008. The biggest beneficiary was Freddy Deeb, who won the event in 2007 for $2.277 million. In 2008, the event had the same amount of entries as the year before, which generated the same prize pool, but a reworked payout structure saw Scotty Nguyen win a little less at $1.989 million.
Looking at the chart above that displays the number of entries by year in the event, the event took its biggest dip in 2009, when it went from 148 entries to 95, losing nearly 36 percent of the field from the year prior. In 2010, the event’s H.O.R.S.E. format was changed to 8-game with the additions of 2-7 triple draw, no-limit hold’em, and pot-limit Omaha. In 2015, more games were added, as badugi and no-limit 2-7 single draw were tossed into the mix to make the event a 10-game format, but it then reverted to 8-game for 2016.
Getting back to this event’s all-time money list, 122 different players have cashed in this event. There have been 169 places paid out over the years, so 47 in-the-money finishes have been represented by players who have cashed more than once.
Leading the way with the most amount of cashes in the $50,000 Poker Players’ Championship areAndy Bloch and Barry Greenstein, both with four cashes apiece. Both also have two final-table appearances. Bloch’s best result was in 2006 when he lost to David “Chip” Reese in the inaugural event and earned $1.03 million. Greenstein’s biggest score in the event was in 2008 when he took sixth place for $355,200.
Michael “The Grinder” Mizrachi is the only player to reach the final table three times, winning the event twice, in 2010 and 2012. Mizrachi is also the event’s all-time leading money earner with nearly $3.4 million in earnings.

How to play 7 Stud Poker