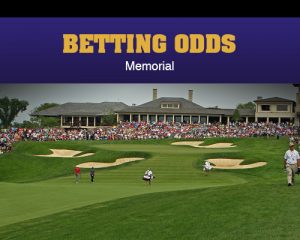 As the U.S. Open draws closer and with the Texas swing wrapped up the PGA Tour
continues to beef up its weekly tournaments on some iconic courses with no shortage of talent in the field. This weekend all eyes will be on the Memorial Tournament at Muirfield Village Golf Club in Dublin, Ohio.
This week will feature an impressive field of competition with Dustin Johnson, Jordan Spieth, Jon Rahm and Jason Day among those in attendance this week.
D.J. will face some tough competition with a total of $8.7 million in prize money on the line this week in Ohio. Nevertheless, he will still be the obvious sports betting favorite for the tournament.
If the last three editions of this tournament are any indication then we might see The Memorial go down to the wire this weekend. William McGirt won here last year in a playoff, which marked the third straight edition of this tournament that was decided in a playoff. With the US Open now just two weeks away, it will be very interesting to see if the top contenders can clinch a victory this weekend.
As stated above, Dustin Johnson is the favorite at +600. The type of gold that Dustin Johnson has been playing is that where a T-12 and T-13 run at TPC Sawgrass and Four Seasons marks his first consecutive weeks outside the top 10 in nine months. Johnson was lighting the golfing world on fire prior to his tumble down the stairs at the Masters and it’s only a matter of time before he really heats up again with the U.S. Open almost here.
Get all the latest Sports Betting updates on your social media outlets. Find us on Facebook!
After all, he did have six top-six finishes in seven of his first 10 starts in 2017 and has produced a top-five finish twice in the last six years at this event while missing only one cut.
More lines for the tournament include Jon Rahm (+1100), Jason Day (+1200), Jordan Spieth (+1200), Hideki Matsuyama (+2000), Adam Scott (+2200), Rickie Fowler (+2500), Matt Kuchar (+3000), Brooks Koepka (+3300) and Justin Thomas (+3500) comprising the rest of the top 10.
Seven of the top 10 in the world rankings and 18 of the 30 best players in the world will be teeing it up at the event. World No. 2 Rory McIlroy committed initially but was forced to withdraw less than a week out after a flare-up of the rib injury that sidelined him earlier this season.
Precisely a year ago it was William McGirt who collected his first PGA Tour victory at the Memorial Tournament, now he is available at +10000 odds. The South Carolina native parred his final four holes to earn the win.
The Memorial Tournament has become a haven for international players. Six of the past 13 champions here have been internationals. Before that, only three of the 27 winners came from outside the United States. Another curious fact is that Tiger Woods is the only man who’s ever gone back to back at the tournament when he claimed three straight from 1999 to 2001. Best betting odds on Memorial are available at BetRegal.com.