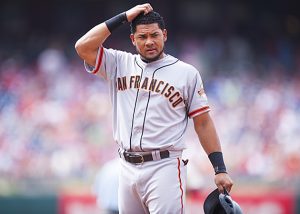 Outfielder Melky Cabrera and the Pittsburgh Pirates have agreed to a minor league contract, according to a report from The Athletic. The contract includes a non-roster invite to spring training.
The Dominican Republic native played in 78 games for the Cleveland Indians in 2018. Cabrera, 34, hit six home runs and drove in 39 runs. He also posted a .280/.335/.420 slash line in 278 at-bats.
Cabrera joins former Indians teammate Lonnie Chisenhall as newly minted Pirates. As a switch-hitter, Cabrera could also platoon with the leftie Chishenhall.
Cabrera follows the major-league signing of Lonnie Chisenhall and minor-league pickups JB Shuck and Patrick Kivlehan as the fourth veteran addition to the Pirates’ outfield this offseason.
Check BetRegal.com and find the best online betting site.
The 34-year-old Cabrera will have an opportunity to earn a role on a team that will open the season without one of its starting outfielders, Gregory Polanco, who likely won’t return until at least mid-April after undergoing shoulder surgery in September. However, until Polanco comes back, Chisenhall figures to receive the lion’s share of playing time alongside holdovers Starling Marte and Corey Dickerson.
A big-league regular throughout most of his career, which began with the Yankees in 2005, the switch-hitting Cabrera settled into a reserve role with the Indians in 2018.
Along the way, he offered passable production from both sides of the plate while limiting strikeouts — both of which have been staples for Cabrera over his career. On the other side, Defensive Runs Saved and Ultimate Zone Rating have each pegged Cabrera as a minus outfielder across his time in the majors, though he nonetheless hasn’t seen much action at DH in AL stints with the Yankees, Royals, Blue Jays, White Sox and Indians.
Get all the latest Betting and Sport News updates on your social media outlets. Find us on both Facebook and Google+
Cabrera will have a chance to earn $2M plus incentives in the majors, per Jon Heyman of MLB Network.