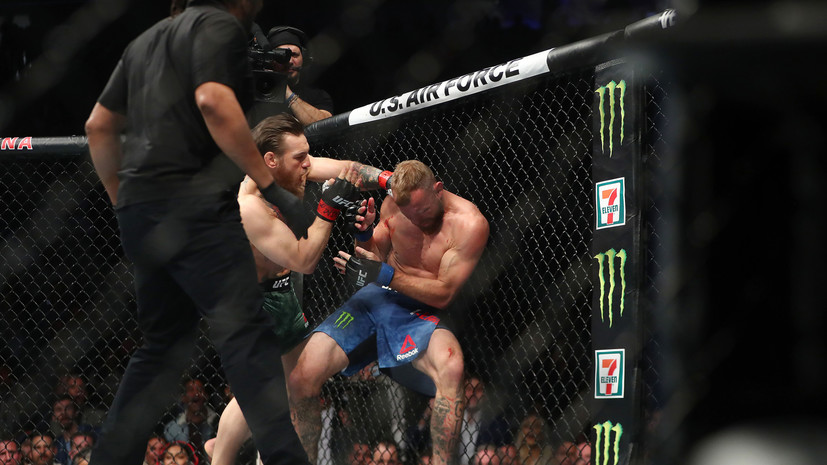 After 15 months away from MMA, and more than three years removed from his most recent triumph, Conor McGregor returned Saturday in a big way.

The former UFC dual champion took out the promotion’s all-time wins leader in just 40 seconds in the UFC 246 main event in Las Vegas. McGregor (22-4 MMA, 10-2 UFC) stopped Donald Cerrone (36-14 MMA, 23-11 UFC) with a TKO to put himself right back into title contention – perhaps in two divisions.

McGregor charged forward in a hurry and missed with a left hand. But a knee grazed Cerrone, and then a pair of shoulders thrown by McGregor may have broken Cerrone’s nose straight away.

McGregor broke away and a few seconds later landed a head kick.

The kick wobbled Cerrone, and after he hit the canvas from a few McGregor punches, he delivered more until referee Herb Dean mercifully stepped in to shut things down, setting off a frenzy from the Irish fans in attendance at T-Mobile Arena.

“I changed levels and came up into it – it was a good shot,” McGregor said. “I made history here tonight. I’m the first fighter in UFC history to secure knockouts (in three divisions) at featherweight, lightweight and welterweight.”

McGregor has expressed attraction in another shot at the lightweight title held by Khabib Nurmagomedov, who is scheduled to defend that belt in April versus Tony Ferguson. But McGregor also could be in line for a big-money fight against recent “BMF” winner Jorge Masvidal if he stays at welterweight – or even could find himself in the title picture at 170 pounds now.

The 31-year-old McGregor was the first fighter in UFC history to hold two belts at the same time. But he never defended the featherweight or lightweight belts; both were stripped from him.