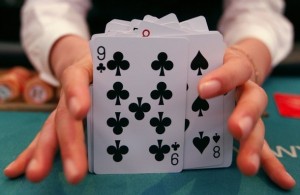 Check Regal Poker for Latest Poker News, poker strategy tips and more.
(pokernews.com)- What a week it’s been for British players with a quartet of our stars winning six-figure scores at theEuropean Poker Tour Barcelona stop.
Team PokerStars Pro Liv Boeree returned to the United Kingdom €391,000 richer thanks to a third-place finish in the €25,500 High Roller 8-Max event, the second-largest score of her career so far. While that sum is mighty impressive, it’s dwarfed by the €586,500 that Mark Teltscher won forfinishing second to Martin Finger in the same event.
An even larger score was made by Kuljinder Sidhu, who was runner-up to Mustapha Kanit in the€10,300 High Roller. Sidhu walked away with a massive €640,000 after a three-way deal, more than doubling his lifetime live tournament winnings.
Amazingly, that was not the largest cash secured by a UK player, which was accomplished by Steven Warburton. The Manchester-based pro narrowly missed out on becoming an EPT Main Event champion, losing out heads-up to John Juanda, but not before bagging €941,613 as part of a three-way deal. Superb work by this talented quartet indeed.
At Regal Poker you will find the best articles about how to play poker, visit us and check out our promotions we offer you the best online poker games.
Keeping with the live poker world, albeit it at a much lower buy-in, Error! Hyperlink reference not valid. to become the latest in a long line of APAT winners. The APAT is one of the most underrated live poker tours in Europe and one that has done so much for British poker over the years. A little fact for you: the aforementioned Warburton cut his teeth in the APAT events, racking up a third-place finish in the 2010 APT Cardiff pot-limit hold’em event!
Over in Ireland, there is a two-week long “Dublin Poker Invasion” taking place that sees a number of major tours run their festivals concurrently. Running now is the MPN Poker Tour Dublin Main Event that has been dubbed the Irish Poker Cup. Two of its three starting flights were completed at the time of this writing with Michael Conaty topping Day 1a and Barry McGovern claiming the Day 1b chip lead.
Lastly for the live poker round-up is the news that Jon Kalmar won £21,000 by becoming thePokerfest Live Mini champion. The inaugural Pokerfest Live festival concludes this weekend with the £300,000 guarantee Main Event.
Into the online poker world now and the news that Tony Poulengeris, known online as “ENIGMA4U4ME,” chopped the PokerStars Sunday Million for a career-best $138,184.70. You can discover which other stars from the UK & Ireland bagged big scores in this week’s Sunday Majors by clicking here.
Finally, both the online poker rankings and the Global Poker Index were updated this week. In the former, Rupert Elder returned to the top 20 in the UK following a couple of big results at 888poker, while in the latter, Warburton and Sidhu’s amazing results in Barcelona propelled them to career-highs.
Don’t forget to head to UK & Ireland PokerNews each and every day for your daily fix of the goings on in the poker worlds of this fantastic countries.
Don’t miss our special articles about Texas Hold’em and blackjack, become the best player that you can be! Get all the latest PokerNews updates on your social media outlets. Follow us on Twitter and find us on both Facebook and Google+!

When to Split in Blackjack?

How to Stop Poker Tilt?