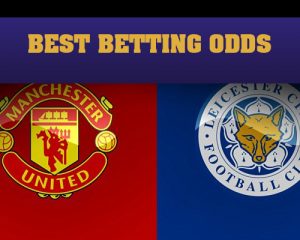 In an effort to meet to the expectations that were set on him by the Red Devils fans, Jose Mourinho gets ready to receive Leicester City in Old Trafford this weekend.
Manchester United is under a lot of pressure to improve their performance as they have already lost against Manchester City and Watford after an encouraging start to the season.
This is an important match for both teams as they steer their season in the right direction, especially because none of the two have had a great start. In their duty to defend their Premier League title Leicester has lost a couple of games and Manchester United’s three straight defeats have eradicated the early optimism.
It should make for an intriguing game which you can follow as it is being aired by several chains starting at 11:30 with full coverage prior to the game. You can double the excitement by taking action in it get the best betting odds on regalpoker.com
Get all the latest Sports Betting and Poker updates on your social media outlets. Find us on Facebook!
There is a lot of speculation regarding the line up that United will use, along with some changes, especially in the midfield as seen on Sunday’s fiasco (3-1 against Watford). Problems are multiple and the need to re consider the whole set up is of huge importance, take Rooney for example, whose performance doesn’t warrant his continued selection. His participation could only be explained with contractual obligations.
There are calls in some quarters for Michael Carrick to be recalled and there is a definite need for someone able to pass the ball and control the tempo in the middle of the park. With the likes of Ander Herrera, Morgan Schneiderlin, Juan Mata, Henrikh Mkhitaryan, Bastian Schweinsteiger and Daley Blind also all available,
Mourinho is required to come up with a more creative combination than was on show at Vicarage Road and to make better use of Paul Pogba’s expensively secured talents in a more prominent role.
It has to be said that Manchester United offer precious little of the attacking pace and variation that Liverpool possess to suggest that they could hand out a similar beating to the Foxes, but they might just benefit from playing Leicester ahead of what must surely be the visitors most eagerly anticipated game of the season to date.
This is a game where most of the pressure is on United and with patience among the Old Trafford faithful likely to be in short supply after three seasons of under-achievement, anything less than three points here could be damaging for a team where confidence is already clearly somewhat fragile.
On the other side, Claudio Ranieri should be in an upbeat mood, which seems to natural in him by the way. The Foxes come into the match in fine form, having bounced back from a 4-1 drubbing at Liverpool to register impressive back-to-back 3-0 victories.
This match could have a significant bearing on both teams for the season ahead. A Manchester victory could re-invigorate their campaign. Anything less and it will be Leicester who will go home believing that they can be genuine top-four contenders again. Get in the sports action today with the best betting odds at RegalPoker.com

How Do You Find The Best Sportsbook?