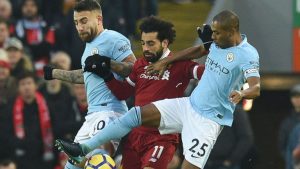 Liverpool has created a six-point lead at the league summit after only 11 ties.

Having lost only one match in the whole of last season, Liverpool would surely fancy its chances of a first title in 30 years if it can extend the early season lead.

City, on the other hand, has been in this position before and will not be freaking yet. A win at Anfield would pile the pressure on Liverpool and send a big message. But the most important thing for Pep Guardiola’s side is preventing defeat.

Liverpool and City traditionally share a hatred for Manchester United (and Liverpool has a geographical rivalry with Everton), but United’s drastic fading in recent years has dimmed the intensity of those battles.

There is plenty of respect between coaches Jürgen Klopp and Pep Guardiola, though not a whole lot of fondness, which adds some extra spice.

Guardiola started stirring the pot last weekend, when he insinuated Liverpool forward Sadio Mané is “sometimes diving” after the Reds secured a dramatic last-minute winner at Aston Villa. Klopp hit back that Guardiola was “fixated” on Liverpool and referenced “tactical fouls”, which City has been blamed of in the past.

Even with the problems in defence and the star-studded attacks both sides possess, these games are usually tense and tight. This fixture last season ended 0-0 while the return at City’s Etihad Stadium was won 2-1 by City. A clearance from John Stones that day helped City to the victory, with replays showing the ball was 11 millimeters from crossing the line.

For Liverpool, Trent Alexander-Arnold and Andrew Robertson play a crucial role. The pair often start Liverpool’s attacks and are responsible for quickly switching the play from one side to the other.

Both are quick and excellent at delivering hard-to-defend crosses. A coach like Guardiola will be well aware of how important Alexander-Arnold and Robertson are to Liverpool’s style of play and will have his own plan to stop them.