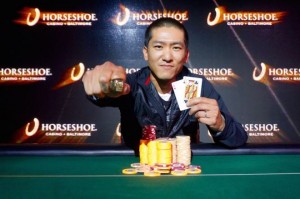 Check Regal Poker for Latest Poker News, poker strategy tips and more.
(pokernews.com)- The 2015/2016 World Series of Poker Circuit Horseshoe Baltimore – the second stop of the tour’s 12th season – attracted 458 entrants to the $1,675 Main Event, which created a prize pool of $687,000. That was distributed to the top 54 finishers, with a healthy $147,699 reserved for the winner.
That man ended up being local pro Ting Xiao, who rallied from a short stack at the final table to capture his first gold ring at his home casino and secure a seat in the 2016 WSOP Global Championship.
“I’ve always wanted a ring,” Xiao said after the win. “I wanted a ring really badly. I play cash games for money and tournaments for the glory. That’s what the ring is about.”
At Regal Poker you will find the best articles about how to play poker, visit us and check out our promotions we offer you the best online poker games.
Prior to the win, Xiao had a little more than $30,000 in live tournament earnings, which included $5,387 for finishing 28th in the WSOP Circuit’s last stop at the Horseshoe Baltimore and a 21st-place finish in a 2010 WSOP $1,500 event for $15,222.
Interestingly, defending champion Chris Csik finished in 10th place for $11,054, while Phil Hernz of Plantation, Florida earned the title of Casino Champion at Horseshoe Baltimore after winning Event #7 — the Circuit’s first-ever Big O event – and making two other final table to bank a grand total of $11,531. As a reward, Hernz received a coveted seat into the 2016 WSOP Global Casino Championship.
Final Table Results

The WSOP Circuit continues September 16-30 at Casino De Campione in Italy andfrom September 17-28 at the Palm Beach Kennel Club in Florida.
Don’t miss our special articles about Texas Hold’em and blackjack, become the best player that you can be! Get all the latest PokerNews updates on your social media outlets. Follow us on Twitter and find us on both Facebook and Google+!

What are Micro Stakes Games?