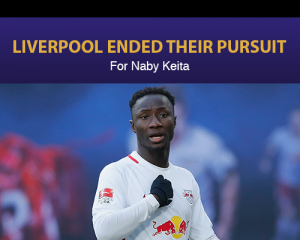 Liverpool had gave up their chase for Leipzig midfielder Naby Keita. The Reds have accepted the Bundesliga decision of not selling the player, with buds worth £57 million and £66 million already rejected. King reported that Keita wanted to go to England and was desperate to play for Klopp, but Liverpool was actively pursuing to take the midfielder, with the fact that more offers to Leipzig would have treated the same. The only was a possible move could be resurrected is if there is a significant turn from Leipzig, but this scenario is very unlikely.
Get all the latest Sports Betting updates on your social media outlets. Find us on Facebook!
Liverpool make another attempt to secure the 22-year-old for the summer of 2018. Per the event, the player is said to be anxious to move to Merseyside and cut a figure during Leipzig’s pre-season preparations. He lunged into a tackle on Diego Demme this week, generating angry reactions from other players and the postponement of training. Nevertheless, Liverpool’s Jurgen Klopp will be disappointed the target would be unlikely to join the club. The news of Keita came at the same time Southampton center-back Virgil van Dijk (another target), told he would not be sold despite his desire to leave, marking a double failure for the Reds.
With so many different competitions, punters always have some betting material. This makes it easier to find good spots to get our money down. If this makes you feel more confident on getting started, go ahead, sign up at BetRegal.com
Keita would have added a different dimension to the Reds midfield. As he is very strong in possession and difficult to take the ball off. His defensive nous, ability to scythe through the phases of the field and his change of pace, are some abilities that made him a great Premier League football player. Liverpool’s willingness to pay so much for the player is because of his talent and they would keep an eye on him throughout the 2017-2018 season. There exists a £48 million release clause in the midfielder’s contract that becomes active at the end of the campaign, that would bring other clubs into the race. However, the Reds need more new faces if they want to push for the title.

Kyrie Irving and his chance to play with the Miami Heat