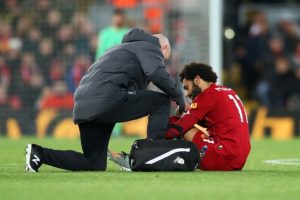 Liverpool are said to be worried about the ongoing ankle problem which is troubling Mohamed Salah.

The Reds forward’s ankle is yet to fully heal after injuring it versus Leicester over a month ago.

Salah took another knock on his ankle during Sunday’s match with Man City, but has still reported for international duty.

After chasing through on goal, Salah was caught up by City’s Fernandinho, who retrieved the ball, but made contact with the Liverpool stars left ankle in the process.

There were worrying looks around Anfield as Salah laid on the turf, with fears he may have aggravated his injury.

He was able to continue after brief treatment, but was later substituted, and was seen with his ankle strapped up with ice at full-time.

Salah was forced off in the clash with Leicester after midfielder Hamza Choudhury clattered him in a tackle, causing the Reds man to sprain his ankle.

Fortunately for Salah and Liverpool, the match was followed by the last international break, during which Egypt did not have a fixture, allowing him a period of recovery.

However his injury is yet to completely clear, with boss Jurgen Klopp admitting recently that there is a persistent issue.

Klopp said: “I think it is more really annoying – for him, not me – the fact that it always has a bit of fluid in, and he has to deal with it, we get it out and it comes back, and stuff like that.”

Salah has now jetted off on international duty with Egypt for their Africa Cup of Nations qualifiers with Kenya on Thursday and Comoros on Monday.

He insisted on reporting for his country, but that has given Liverpool no time to assess the injury further, with Salah now set to undergo an assessment with Egypt’s medical staff.