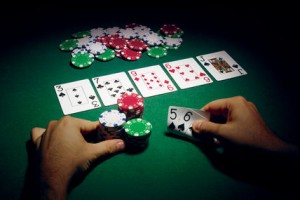 Check Regal Poker for Latest Poker News, poker strategy tips and more.
Kickers are the leftover cards after a hand is declared. They determine who wins if players have the same hand.
It’s also used to describe the secondary card in the hole in Texas Hold’em , for instance, if you have a ace-nine in the hole, you might say you have an ace with a nine kicker. If you had a low card with your ace, you still might be “out kicked” by another player with a higher kicker even if you end up with a pair of aces.
Learn everything that you need to know about how to play poker, and become a professional in Blackjackand Texas Hold’em
While the hand is judged on the basis of its ranking, i.e. carrying a single pair, it can be beaten by hands ranking higher or beat hands ranking lower than it without the kicker coming into play. The kicker usually comes into play in case of a tie. For e.g. assuming that a player has the hand mentioned above, while another player has the hand A-A-K-2-3, then the pair causes a tie, bringing the kickers into play. Once the kickers are in play, then the decision of the winning hand is made on the basis of the highest kicker. So while the first player has an 8-9-2, s/he is beaten by K-2-3.
However if a player has the hand A-A-K-5-3 while another player has the hand A-A-K-3-2, then the first kicker for each player, i.e. King, is also common and there still remains a tie between the two players. At this point, the next kicker i.e. 5 for the first player and 3 for the second is compared and clearly, the first player takes the pot.
In draw poker, the kicker is the name given to an unmatched card that a player decides to keep in the hope that it will get paired on the draw. In case it doesn’t get matched, then it will act as a standard kicker, as described above. In some cases, a kicker is retained by a player just to deceive the opponent into believing that s/he has a “three-of-a-kind” instead of just having a pair and a kicker.
In Texas Hold’em form of poker, kickers are paid a lot of importance because players normally gain a winning hand by matching a card in hand with one or more on the board. In such a case, the second card in hand normally acts as the kicker. For e.g. if a player gets the hand 5-J while another gets the hand 4-5, and the board, after the river, has the cards 3-5-7-9-T, then each player gets a 5-pair using one of the cards s/he is holding in her/his hand. The other card i.e. Jack in the case of player one and 4 in the case of player two, are used to determine who the winner is. Since Jack is obviously higher than 4, therefore player one is the clear winner in this round on account of having a higher kicker than player two.
There might be a case where the players, holding 5-J and 4-5, may look to match their cards with a board that has A-A-K-3-4. In such a case, the 5-pair and Ace-pair are common to both players due to their higher rank. Now the other cards in each players’ hand, i.e. Jack and five, are both lesser than the highest card on the board, i.e. King. Therefore, the highest card becomes the kicker, meaning King. As a result, both players end up with the hand – A-A-5-5-K, causing a tie and therefore, a split pot.
Don’t miss our special articles about Texas Hold’em and blackjack, become the best player that you can be! Get all the latest PokerNews updates on your social media outlets. Follow us on Twitter and find us on both Facebook and Google+!