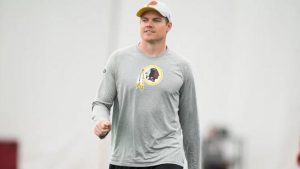 The Washington Redskins are adjusting their offensive coaching staff after finishing 29th in the NFL in points scored last season.
The team announced Tuesday that Kevin O’Connell has been promoted from passing game coordinator to offensive coordinator. Matt Cavanaugh will be the team’s senior offensive assistant after serving as offensive coordinator last season.
O’Connell has been with the Redskins since 2017, spending the past two seasons working with the quarterbacks. He has also spent time on the sidelines with the San Francisco 49ers and Cleveland Browns in his coaching career.
This comes after a five-year playing career, although he only appeared in two regular-season games after being a third-round draft pick in 2008. He threw six total passes for the New England Patriots in his rookie season.
Check BetRegal.com and find the best online betting site.
Meanwhile, O’Connell has quickly climbed up the ladder as a coach and will now run the Redskins offense and will hope to find more success after a disappointing 2018. The squad jumped out to a 6-3 start to the year before finishing 7-9, coinciding with the season-ending injury to Alex Smith.
Though he is just 33 years old, the Redskins promoted Sean McVay to offensive coordinator in 2014 when he was just 28, and now he is headed to the Super Bowl as head coach of the Los Angeles Rams. Washington will hope for a similar career path from the former San Diego State quarterback.
Meanwhile, Cavanaugh will be reassigned after two years as offensive coordinator with the Redskins. He has spent 10 seasons as an offensive coordinator in the NFL and only once has he led an offense that finished in the top 10 in points scored.
Get all the latest Betting and Sport News updates on your social media outlets. Find us on both Facebook and Google+
Even if the 62-year-old is no longer calling plays, he will hope he can make a positive impact in 2019.