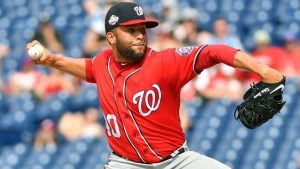 All-Star closer Kelvin Herrera will pitch with the Chicago White Sox next season after reportedly agreeing to a deal on Monday.
Per Jeff Passan of ESPN, the right-hander will sign a two-year deal for $18 million with a vesting third-year option.
Herrera split time in 2018 between the Kansas City Royals and Washington Nationals. He got off to a terrific start, posting a 1.05 ERA with 22 strikeouts in 25.2 innings for the Royals.
Needing to boost their bullpen, the Nationals acquired the 29-year-old on June 18. He struggled after the deal with a 4.34 ERA, 24 hits a During an Aug. 26 win over the New York Mets, Herrera’s season came to an end when he tore the Lisfranc ligament in his left foot while running to cover first base.
“I still got the out,” the right-hander told reporters after the game. “High price for it.”
Check BetRegal.com and find the best online betting site.
The timing of Herrera’s injury would seem to have impacted his leverage in free agency. He was looking for the first big payday of his career. He made $7,937,500 during his final year of arbitration in 2018.
Herrera was one of the most dependable relievers in Major League Baseball from 2012-17. He ranked second in MLB in innings pitched (413.2), fourth in appearances (413) and 18th in FanGraphs wins above replacement (6.2) during that span.
Coming off the injury to his foot, Herrera will have to prove his stuff is going to be back at its normal level. The Dominican native averaged 96.5 mph with his fastball last season.
llowed, 16 strikeouts and eight walks over 18.2 innings in 21 games.
Get all the latest Betting and Sport News updates on your social media outlets. Find us on both Facebook and Google+
The White Sox believe Herrera is worth the risk at this point in the offseason. His track record of success makes him a good gamble, and if he hits for them, they have a dominant late-inning reliever who can pitch in high-leverage situations.