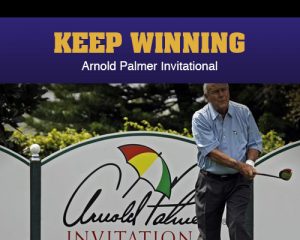 The PGA Tour and the eyes of the sporting world will be looking at Bay Hill this week as one of the greatest golfers of all time, Arnold Palmer, is celebrated this weekend in the Arnold Palmer Invitational, which takes place in Bay Hill, Florida. This is the first playing of the Invitational since the death of ‘The King’.
A brand new bronze statue of the PGA Tour legend will be on display at the first and 10th tees. A loaded field is set to descend on the Sunshine State, and sportsbooks as well as golf bettors are gearing up for a wild weekend of action.
Thirteen of the top 25 in the world rankings will participate in the event, with Day back to defend his title. Last year Jason Day started his push to becoming World Number One with a one shot victory over Kevin Chappell. The Australian is 14/1 to defend this year. The Aussie prevailed in a sprint to the finish thanks to a brilliant up-and-down on the 18th hole to record a one-shot win over Kevin Chappell. After pulling out of the WGC-Mexico two weeks ago with a litany of injuries, Day is reportedly back to full health.
Day’s triumph bucked a trend that doesn’t favor international players. Only six non-Americans have won at the Arnold Palmer Invitational, as Yankees have claimed the bragging rights 32 times. Be cautious of him this time around, though.
Even though he’s coming off a championship, Day’s previous best finish at the tournament was a tie for 17th. His season hasn’t gotten off the ground yet, so it might be wise to wait on the 29-year-old to find his form before betting on him.
Get all the latest Sports Betting updates on your social media outlets. Find us on Facebook!
Other big names in the field include: Rory McIlroy is the +700 favorite at different books, with Henrik Stenson (+900), Jason Day (+1400), Hideki Matsuyama (+1400), Rickie Fowler (+1600), Justin Rose (+1800), Brandt Snedeker (+3500), Paul Casey (+3500), Thomas Pieters (+3000) and Tyrrell Hatton (+4000) rounding out the top 10.
There are 84 bunkers in play at Bay Hill and water is in play on half of the holes. The course was revamped in 2014 to make it easier for the playing public, which has caused the pros to score better every year since. At 7,419 yards, it’s fairly long for PGA Tour standards, and big bombers off the tee traditionally enjoy success with the driver.
Betting Tips
Just a few weeks after his win at The Honda Classic, Rickie Fowler is one of the favourites who has properly tasted success in the last couple of months. Had a tied 3rd here in 2013 and will certainly want to win an event with so much significance this season.
Brandt Snedeker has had two top 15s here in the past and he also has three top 10s in his past four starts on tour this season. One of those players who should have won this year but is yet to do so.
Matthew Fitzpatrick is starting to get more and more comfortable in America, two top 20s from three starts, he played here last season and finished 27th and also played here in 2014 as a young 20-year-old. Keep winning betting on alternative sports, sign up now at BetRegal.net.