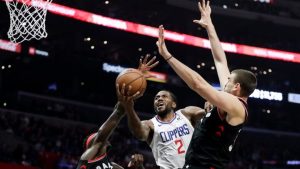 Leonard ended with 12 points, 11 rebounds and nine assists to go with nine turnovers. Last season, he led the Raptors to their first championship, averaging 30.5 points and 9.1 rebounds in 24 postseason games to earn his second Finals MVP honor.

Pascal Siakam had 16 points and 10 rebounds, Norman Powell added 15 points and Fred VanVleet had 14 points for the injury-depleted Raptors, who had their three-game winning streak snapped in the second game of a back-to-back.
The Clippers shot just 37% but dominated the boards, 66-38, led by 12 each from Patrick Beverley and JaMychal Green.

Leonard faced plenty of double coverage throughout the game.

His first five points all came on free throws, including two technicals. Leonard missed his first six field goal attempts and finally scored on a coast-to-coast layup midway through the third quarter to put the Clippers up 62-55.

From there, the Raptors outscored Los Angles 23-11 the rest of the period. Siakam scored seven points and VanVleet added five in the spurt as neither team led by more than two until Matt Thomas’ 3-pointer and basket sent the Raptors into the fourth leading 78-73.

The fourth was a series of mad dashes and bodies piled in the paint on both ends.

The Raptors tied the game for the last time at 82-all on Chris Boucher’s 3-pointer. They managed just three field goals the rest of the way.

Starting forward OG Anunoby got poked in the right eye by Leonard scrambling for a rebound two minutes into the game and didn’t come back.

Toronto was without G Kyle Lowry (broken left thumb) and F/C Serge Ibaka (right ankle sprain), who both got hurt Friday at New Orleans. Lowry will be re-evaluated in two weeks, while Ibaka is out indefinitely.