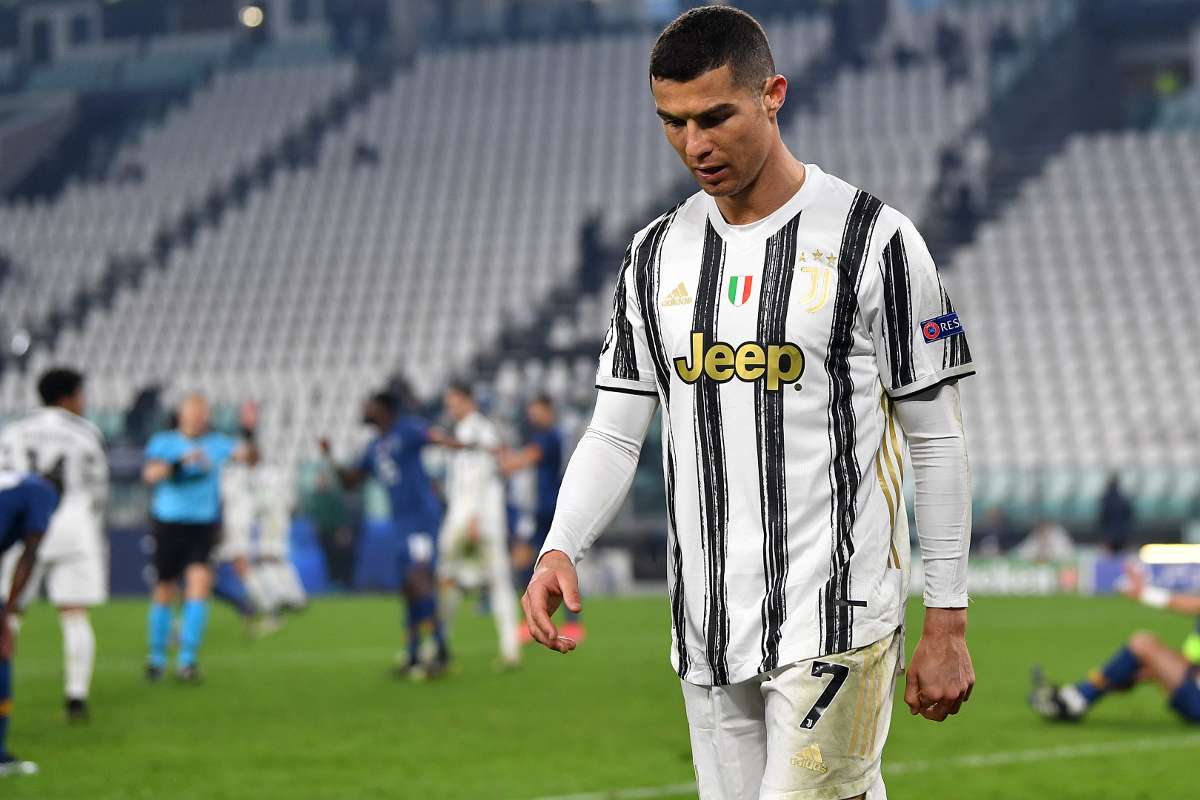 Ten-man Porto squeezed past Juventus to reach the Champions League quarterfinals despite a 3-2 defeat after extra time at the Allianz Arena saw them triumph on away goals with a 4-4 aggregate scoreline.

In a dramatic tie, Sergio Oliveira scored the crucial goal with a free-kick in the 117th-minute, which went through Cristiano Ronaldo’s legs and into the back of the Juve net.

Federico Chiesa’s two goals after Porto had been reduced to 10 men saw the tie into extra time but, despite their one man disadvantage, Porto made it through

Juve, who were knocked out by Ajax and Lyon in the past two campaigns, were lucky to still be in the tie having been second best and trailing 2-0 in Portugal when Chiesa netted a late away goal.

However, despite that strike meaning Juve only needed to win 1-0 to progress to the quarterfinals, they went behind at the Allianz Stadium inside 19 minutes when defender Merih Demiral fouled Medhi Taremi in the box and Sergio Oliveira coolly slotted home the penalty.

Much like the first leg, Porto boss Sergio Conceicao appeared to have got the better of Andrea Pirlo from a tactical point of view as the Portuguese side nullified Juve’s attack with former Real Madrid defender Pepe excellent.

Juve emerged after the break with more purpose.

The match totally flipped within five second-half minutes. First, on 49 minutes, Chiesa pulled a goal back after being played in by Ronaldo before Taremi, having recently received a yellow card, was booked again for kicking the ball away.

The Juve onslaught was inevitable and Chiesa put the Bianconeri level in the tie and 2-1 ahead on the night when he headed in from Juan Cuadrado’s perfect cross.

Ronaldo should have put Juve ahead on 78 minutes when he headed just wide following another superb Cuadrado cross, while Alvaro Morata thought he had scored a stoppage-time winner for Juve only to be flagged offside before Cuadrado hit the bar with a stunning effort at the end of normal time.

In the 117th minute, Oliveira’s free-kick went through Ronaldo’s legs and into the back of net to seal Porto’s passage into the last eight. Adrien Rabiot immediately headed in a goal at the other end to give Juve the win on the night, but it was not enough.

“When you make four big errors over two legs in the Champions League Round of 16, you can get eliminated,” Pirlo told Sky Sport Italia.

“We had started well and there was a chance with Alvaro Morata to take the lead immediately. It didn’t go in, there was an error for the penalty, we could’ve conceded a second, but then played the game we should’ve done in the second half, helped also by the extra man.”

Pirlo is in his first campaign as Juventus manager and insisted that he is the right man for the job, despite this setback and the fact that his side lie third in Serie A, 10 points behind leaders Inter.

“I was brought in for a more ample approach, a project that was always meant to develop over several years, so I am not concerned.