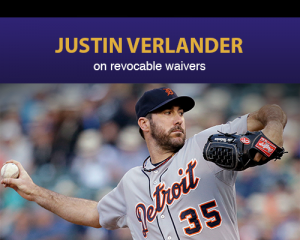 On Wednesday, the pitcher Justin Verlander from the Detroit Tigers was placed on revocable waivers as the July 31 non-waiver trade deadline was on the mirror. The candidate could be trade before the August 31 deadline. The placement was reported by ESPN’s Jerry Crasnick. The reports said there are no deals happening because Verlander has full no-trade rights as a 10-year MLB veteran with at least five years on the same team this makes impossible the deal to happen by the end of the month.
Get all the latest Sports Betting updates on your social media outlets. Find us on Facebook!
However, the Tigers will be able to engage every deal in MLB if the player makes it through waivers. Still exist various teams interested on the player, but haven’t been concrete negotiations. The Tigers also have the option to pull off the player if the team claims on him. General manager Al Avila may be inclined to see what the market has to offer for the veteran. Verlander’s name was bantered about leading to the July 31 non-waiver deadline. The Chicago Cubs were discussing the former American League Cy Young winner before the deadline.
With so many different competitions, punters always have some betting material. This makes it easier to find good spots to get our money down. If this makes you feel more confident on getting started, go ahead, sign up at BetRegal.com
On July 20,  Anthony Fenech reported Houston Astros had “minimal” talks regarding a trade for Verlander. But they are only rumours about the future of the player, there isn’t any deal already. In addition to Verlander’s no-trade rights, the contract he has is also an impediment. He’s owed $28 million in each of the two seasons with an important option of $22 million in 2020. The player is fighting for a negotiation with any team even though he finished last season with good statistics. The 34-year-old player has struggled in 22 starts this season with a 4.29 ERA, 126 strikeouts over 130 innings and 1.44 WHIP.