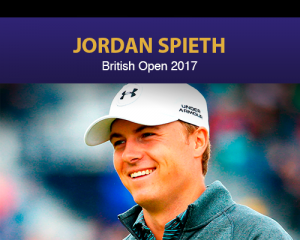 This Friday, Jordan Spieth lead the 2017 British Open after a second round of one-under 69. The competition is taking place at Royal Birkdale Golf Club in Southport, England. The American athlete took on flight on the windy conditions and a wet day of competition. Jordan experienced a wind change of direction during the middle of this round, but the experienced 23-years-old remained calmed. The weather ruined many players’ form, as it made the conditions very challenging.
Get all the latest Sports Betting updates on your social media outlets. Find us on Facebook!
The leader had a perfect start as he fired a birdie on the first hole. A bogey on No.9 didn’t stopped Spieth, as he appeared happy and push forward with his strategy. He made a high-quality chip in on No. 10 in pouring rain. This moment excited the crowd, as the athlete take a strong lead as back-to-back birdies. However, the hole who showed the crowd how amazing he was, was No.15 in which he scored a magnificent eagle. He showed no fear as he attacked a 17-foot putt, and the ball broke from left to right as it sink in the hole. The crowd went crazy again as they appreciate the player’s skill. He chipped in, with a 35- footer, with a few feed and made eagle, just in the last six holes.
With so many different competitions, punters always have some betting material. This makes it easier to find good spots to get our money down. If this makes you feel more confident on getting started, go ahead, sign up at BetRegal.com
As they went near the clubhouse, the light began to fade quickly. He saved par on No.17 and received applauses as he left the field. Spieth’s calmed temperament and its reaction to the worst conditions are the ones who took him where he is now. Ahead of Saturday’s events, Rory McIlroy is the rival of Spieth in the competition after doing two-under 68 to remain in full contention. The table puts Spieth with a -6 in total, in second place Matt Kuchar with a -4 and in third place Ian Poulter and Brooks Koepka with a -3.

The 6-0 that has changed the Cubs´ season

Kyrie Irving and his chance to play with the Miami Heat