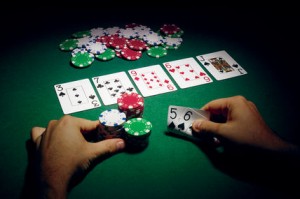 Check Regal Poker for Latest Poker News, tips and more.
Planet Hollywood Resort Casino is Las Vegas’s home for the glitz and glamour of tinseltown. Its walls are decorated with images of stars of film and music. And for the past weekend, it was home to stars of the poker world, who came out in droves to play the Main Event of the World Series of Poker Circuit. After three days of intense competition, it was Englishman John Eames whose star shone brightest of all. He won the tournament, earning his first WSOP Circuit ring and $289,706 in prize money.
Regal Poker is the Poker Online website, visit us and check out our promotions we offer you the best online poker bonus.
Final Table Results

John Eames was almost the first player eliminated from the final table. After he doubled up Quang Ngo, he was down to his last 220,000 when the big blind was 50,000.
Matt Berkey went on to finish in second place for $179,119. Berkey was on top of his game throughout the entire tournament. At the end of Day 1, he was the overall chip leader, and only one other player, 2010 November Niner Joseph Cheong, was close to him. He was atop the leaderboard again at the end of Day 2. He battled heads up against Eames for almost two hours. When they started heads-up play, Eames had a slight lead. He extended it until Berkey was short-stacked, but Berkey came roaring back to take over the chip lead. Soon afterward, Eames won a big all-in pot for almost 75% of the chips in play. Then it wasn’t long before he held all the chips, and Berkey’s amazing run this tournament halted in second place. The tournament finally ended at about 1:15 a.m., and an exhausted Eames had nothing but praise for the runner-up finisher.
Looking for best online poker game website? Follow us and check out our promotions we offer
This was actually the first Circuit event Eames has ever played. After this success, though, it likely won’t be the last. And by virtue of his victory in this Main Event, he earns an entry in next year’s WSOP National Championship.
Monday was the third and final day of the Main Event. It started at 2 p.m. when 18 players who survived the first two days of action returned. After a little more than 2 and a half hours, half of them had been eliminated, and the tournament was down to the official final table of nine players.
At first, it looked like the final table would be an extremely lengthy affair. It wasn’t until the 69th hand at the final table that the first player was eliminated (Michael Skomac in 9th place). By comparison, when the November Nine met for the final table of the WSOP Main Event two weeks ago, the first elimination occurred on the 56th hand. However, at Skomac’s elimination, the pace of bustouts picked up. On the 104th hand, Brad Libson was eliminated in 5th place, leaving only four players still with chips: Berkey, Eames, Ping Liu, and Dustin Johns. Four-handed play lasted a while as well, almost 60 hands. Then, at about 11:30 p.m., Dustin Johns and Ping Liu were eliminated on back-to-back hands, leaving Berkey and Eames to battle for the spoils—a WSOP Circuit ring, the lion’s share of the prize pool, and a free entry into the 2015 WSOP National Championship.
The tournament featured two starting flights, one on Friday and one on Saturday, and a massive field turned up to play. The event attracted a total of 1,044 entries, making it the second largest Main Event on the Circuit so far this year. The entry list was a veritable “who’s who” of the poker world. Entrants included 2001 WSOP Main Event champion Carlos Mortensen, 2013 WSOP Main Event champion Ryan Riess, and 2014 WSOP APAC champion Scott Davies. There were four November Niners in addition to Riess—Joseph Cheong, Phil Collins, Jake Balsiger, and Dan Sindelar, who finished 7th in the Main Event earlier this month. There were also several WSOP bracelet winners, including Kathy Liebert, Robert Mizrachi, Leo Wolpert, Dan Heimiller, and Eric Baldwin. Other well-known poker faces were scattered throughout the field, David Levi, Jimmy Fricke, and Chris Lindh. Lindh finished in 9th place the last time the WSOP Circuit was in Las Vegas (at Caesar’s Palace in February), and he finished 10th at Planet Hollywood today.
Get all the latest PokerNews updates on your social media outlets. Follow us on Twitter and find us on both Facebook and Google+!