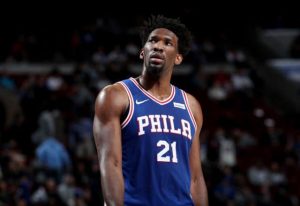 The Philadelphia 76ers are playing in their first playoff game since 2012 on Saturday, but they’ll be without one of their key players against the Miami Heat. Joel Embiid will miss Game 1 after breaking a bone near his left eye in a collision with rookie Markelle Fultz.
Although he’s been cleared of concussion protocol, Embiid has been wearing a mask in shootaround, and as recently as Wednesday he told the Associated Press that he wasn’t feeling up to par.
”I don’t think I’m ready to play,” he said, via Sports Illustrated. ”It still doesn’t feel all the way right.” Embiid got surgery for the injury on March 31, and he seems to be recovering fairly quickly.
Check BetRegal.com and find the best online betting site.
Of course, with the way the 76ers played down the stretch without him, it makes sense why there’s no urgency to rush Embiid back. They went 8-0 without their big man, ending the season on an overall 16-game win streak, just two shy of the franchise’s regular-season record. Ben Simmons has proven he can lead the team without the 7-foot center, while Fultz has provided a welcome spark.
“He will not play in Game 1, and from that point going forward, we’ll figure something out,” Brown told Patrick. “Unless something remarkable happens, Dan, I don’t plan on him playing in Game 1.”
The teams open their series at 8 p.m. Saturday at Wells Fargo Center, with Game 2 of the series there on Monday, also at 8 p.m., before shifting to AmericanAirlines Arena following a two-day break.
Get all the latest Betting and Sport News updates on your social media outlets. Find us on both Facebook and Google+
After missing each of his first two NBA seasons due to injury and being limited to 31 games in 2016-17, Embiid played a career-high 63 games this season.
The All-Star big man averaged 22.9 points, 11.0 rebounds, 3.2 assists and 1.8 blocks during those contests.
When Embiid does return, it is expected that he will wear a protective mask after doing so during shootarounds.