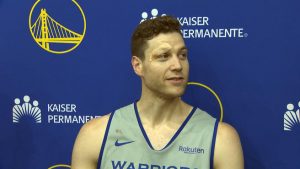 Former NCAA sensation and overseas scoring star Jimmer Fredette has quit the Golden State Warriors summer league team after two games.
The San Jose Mercury-News reported the departure Wednesday afternoon before Warriors summer league coach Aaron Miles confirmed the news with reporters.
The Mercury-News reports that Fredette left the team to minimize injury risk as he plans to ponder overseas options.
Fredette, a 6-2 guard, starred at BYU and earned the Naismith and Wooden Awards as college basketball’s National Player of the Year in 2011.
The Milwaukee Bucks selected Fredette with the 10th pick in the 2011 NBA draft and sent him to the Sacramento Kings on a draft-day deal.
Check BetRegal.com and find the best online betting site.
Fredette struggled to find footing in the NBA as an undersized scoring guard, starting just seven games over five seasons with the Kings, Chicago Bulls, New Orleans Pelicans and New York Knicks.
After averaging 28.9 points on 45.2 percent shooting during his senior year at BYU, Fredette has averaged six points on 40.9 percent shooting over the course of his NBA career.
In 2016, Fredette shifted his career to China, where he played for the Shanghai Sharks and again found his scoring prowess against lesser competition. He averaged 36.9 points per game for the Sharks over three seasons and made international headlines with a 75-point game in 2018.
His talent earned him the nickname Jimo Dashen, which translates to “lonely god” or “lonely master,” as in he’s so far ahead of the competition that he stands alone.
Get all the latest Betting and Sport News updates on your social media outlets. Find us on both Facebook and Google+
In March, Fredette returned to the NBA with the Phoenix Suns on a two-year deal after three years in China. He averaged 3.7 points on 27.6 shooting over the course of six games.
The Suns declined their team option on Fredette for next season, and he joined the Warriors summer league team.