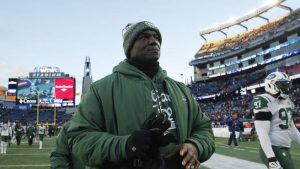 Another season of failing to live up to expectations has ended Todd Bowles’ stint as head coach of the New York Jets.
The team fired the fourth-year coach amid a 4-12 season characterized by losses to some of the NFL’s worst teams.
“I would like to thank Coach Bowles for his dedication to the New York Jets for the last four years,” Jets Chairman/CEO Christopher Johnson said in a statement. “After carefully evaluating the situation, I have concluded that this is the right direction for the organization to take. I would like to wish Todd, Taneka and their family only the best.”
Following a stunning performance in the season opener against the Lions that seemed to suggest Sam Darnold and the Jets were poised to make a run at a potential playoff berth this season, blunder-filled losses to the Browns, Jaguars and Bills annihilated any real chance of New York evolving into a contender for the postseason.
Check BetRegal.com and find the best online betting site.
While Darnold has shown some progress under Bowles in his rookie season, it wasn’t enough to help the coach keep his job.
General manager Mike Maccagnan will return and will be directly involved in the coaching search, according to the team’s release.
Bowles’ firing ends what was once a promising tenure. In Bowles’ first season, the Ryan Fitzpatrick-led Jets came painfully close to a postseason berth, narrowly missing the playoffs by losing to Buffalo in Week 17 and finishing on the wrong end of a tie with Pittsburgh for the final wild-card spot. Expectations were high, but came crashing down the following season when most of the Jets returned to the ground. Fitzpatrick held out for a new contract, received it and promptly proved he wasn’t worth it. The season’s results followed suit.
Get all the latest Betting and Sport News updates on your social media outlets. Find us on both Facebook and Google+
His greatest achievement may have been his team’s 2017 performance, finishing 5-11 after much of those who follow football expected them to win at most a game or two because the roster was so devoid of talent. Bowles coached his team up, helping them to a 3-2 start before unsurprisingly tripping and tumbling down the stretch, going 2-9 in their final 11.