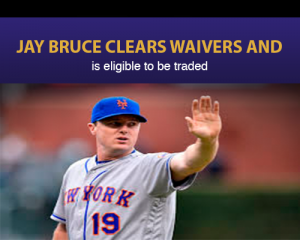 On Friday, New York Mets outfielder Jay Bruce cleared waiver and pave the way for him to be traded to any team of the MLB before the August 31 waiver deadline. The 30-year-old player is owed $4 million for the remainder of the 2017 season. He’s hitting .269/.325/.531, 75 runs batted and 29 home runs this season. This is the first full year of the player in New York. Those statistics show the consistency of the player and told the press he is really proud of himself because has been preparing everyday to be the guy everyone can count on the post and been the quality piece to a winning team.

Get all the latest Sports Betting updates on your social media outlets. Find us on Facebook!
One report showed Bruce was not garnering interest on the trade market despite his solid power numbers. He cleared waivers with a manageable $4 million remaining for this season to confirm the narrative. The player was considered a 2.2-win this season,his best total since 2013, as he has never been particularly good defensive outfielder. FanGraphs measures showed that the player has been vastly better than he was in any of the previous three season. The measures also position the player as pick No. 12 overall and talks about his contract of $51 million in 2011-2016. He was drafted in June 2005 as an amateur.
With so many different competitions, punters always have some betting material. This makes it easier to find good spots to get our money down. If this makes you feel more confident on getting started, go ahead, sign up at BetRegal.com
American League teams in need of pop could use him as a designated hitter and platoon in a corner outfield spot. Hitting free agency at the end of the year, the Mets aren’t likely to ask for any prospects. Bruce should have been moved by the deadline but now that he’s cleared waiver, teams would probably start looking closer to deadline, when their financial obligation will be almost the bare minimum.

Aaron Rodgers is off for Thrusday`s Game