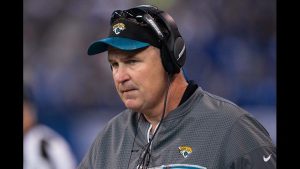 The Jaguars fired running backs coach Tyrone Wheatley, sources told NFL Network’s Tom Pelissero on Monday.
Wheatley is the second member of the Jaguars’ offensive coaching staff to lose his job this year. Jacksonville parted ways with offensive coordinator Nathaniel Hackett in late November.
Wheatley’s firing comes one day after the Jaguars’ brain trust — executive vice president of football operations Tom Coughlin, general manager Dave Caldwell, coach Doug Marrone — received a vote of confidence heading into 2019 from owner Shad Khan.
This news also comes in light of Coughlin’s comments regarding the behavior of Jaguars running backs Leonard Fournette and T.J. Yeldon during their season-ending loss to the Houston Texans. Coughlin said he was disappointed in the “selfish” behavior of Fournette and Yeldon, who sat by themselves on the bench throughout the game.
Check BetRegal.com and find the best online betting site.
In addition to being in the dog house with Coughlin, Fournette saw his remaining guarantees voided by the team as a result of his suspension, Marrone confirmed Monday. The second-year back is expected to file a grievance.
Marrone hired Wheatley in 2017 after the former Michigan running back spent two years coaching running backs at his alma mater. He previously spent five years on Marrone’s staffs at Syracuse and with the Buffalo Bills from 2010 to 2014.
After ranking first in the league in rushing in 2017 (141.4 YPG), the Jaguars fell to 19th in 2018 (107.4).
When asked Monday what he wants to change on the offensive side of the ball, Marrone told reporters, “Availability, coach ability and scheme. When I talk about that, we have to do a better job with the players we have available.
Get all the latest Betting and Sport News updates on your social media outlets. Find us on both Facebook and Google+
We have to do a better job if those players don’t become available, what we’re going to do next. I think that’s an important thing when we look at it, and I think that was a mistake that I made this year.”