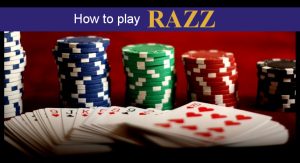 Razz (Seven Card Stud, played for low only) is a poker game in which the best Ace to Five low poker hand wins the pot at showdown. In Razz, players are dealt seven cards throughout the course of the hand, but only the best five-card low hand possible for each player is used to determine the winner. Unlike in Seven Card Stud Hi/Lo or Omaha Hi/Lo, in Razz there is no ‘eight or better’ requirement to win the pot.
Razz uses the ‘Ace to Five’ or ‘California’ system for ranking low hands. Straights and flushes do not count against a hand, and Aces are always low, so the best possible hand is a ‘wheel’: 5, 4, 3, 2, A. To help understand the ranks of hands, the following sample Razz hands are ranked from least powerful (#1, will rarely win the pot) to most powerful (#12, the nuts):

An unpaired low hand is always ranked from its highest card downwards. So for example, hand #10 is known as a ‘Six-low’ because its highest card is a Six. Hand #9 is a ‘Nine-low’, and Hand #5 is a ‘King-low’.  In poker slang, you distinguish between close low hands by going further down the ranks, so hand #11 would be called a ‘Six-Four low’, which beats hand #10, a “Six-Five low”.

Ante
Before a game of Razz begins, all players ante a nominal amount (the exact amount depends on the game, and is displayed in the table’s title bar). This is the cost of being dealt into the hand. In a game with limits of $1/$2, for example, the ante would be $0.15.

Third Street
Each player is initially dealt three cards, two hidden hole cards and one face up. In Razz, the player with the highest exposed card is the ‘bring-in’, and is forced to start the action. They must make another nominal bet (again, the exact size of the bring-in depends on the game) or, if they choose, a full bet in the lower betting increment. Action continues clockwise around the poker table until betting is complete for the round.

Fourth Street
Each player now receives another exposed card, called ‘Fourth Street’. The first player to act is the player with the strongest (lowest) exposed hand. By rule, this player may either check or bet. The amount will be a small bet ($1 in a $1/$2 game). There is a round of betting.

Fifth Street
Each player now receives another exposed card, called ‘Fifth Street’. Again, the first person to act is the player whose exposed cards are lowest. For example, a player with an Eight-high would act first, if the only other players in the hand were showing a pair of Sevens and a Queen-high. The player with the Eight-high could either check or bet the larger betting amount. Starting on Fifth Street and for the rest of the hand, all bets and raises are in big bet increments (for example, $2 in a $1/$2 game).

Sixth Street
Each player now receives another exposed card, called ‘Sixth Street’. Again, the first person to act is the player whose exposed cards are the lowest. There is a round of betting.

Seventh Street (or the River)
Each player now receives a seventh and final card, which is dealt face-down and known only to the player to whom the card is dealt. As with earlier streets, the first person to act is the player whose exposed cards have the lowest poker value. There is a final betting round, and if more than one player remains, we reach the Showdown.

The Showdown – Determining the Winner
If there is more than one remaining player when the final betting round is complete, the last bettor or raiser shows his or her cards first. If there was no bet on the final round, the player in the earliest seat shows his or her cards first (Seat 1, then Seat 2, and so on). Further hands involved in the Showdown are exposed clockwise around the table.
The player with the best five-card Ace to Five low hand wins the pot. Unlike Seven Card Stud Hi/Lo and Omaha Hi/Lo, there is no ‘qualifier’; the best low hand wins the entire pot. After the pot is awarded to the best low hand, a new game of Razz is ready to be played. If two or more hands have the same value, the pot is equally split among them. There is no precedence of suit for the purposes of awarding the pot.

How to play 2-7 (Deuce to Seven) Triple Draw