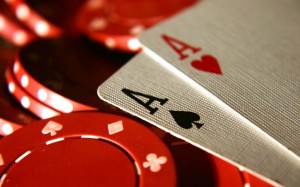 Check Regal Poker for Latest Poker News, tips and more.
(pokernews.com) -The last stop of the Hollywood Poker Open (HPO) Season 3 — before the season-ending $2,500 Championship Event at M Resort Casino Spa in Las Vegas that is — kicks off tomorrow at the Hollywood Casino in Columbus, Ohio.
The HPO Columbus will run from May 14-25 and feature 32 events, 10 of which are HPO-sanctioned “featured” events. As usual, 2003 World Series of Poker Main Event champ and HPO ambassador Chris Moneymaker will be in attendance to play the Regional Main Event and entertain players in both the side events and cash games.
At Regal Poker you will find the best articles about how to play poker, visit us and check out our promotions we offer you the best online poker games.
Last year, Joey Couden overcame a 7-1 chip disadvantage to win the HPO Columbus for $60,827. That tournament attracted 126 entrants – an HPO record at the time – and created a prize pool of $202,754. Back then the Main Event was an $1,800 buy-in, so with Season 3’s more affordable $1,115 price tag there’s a good chance the field will grow even bigger.
The Columbus stop continues what has been a tremendously successful Season 3. Last November, Jesse McEuen kicked things off when he took down the HPO Lawrenceburg for $49,676, and in early February Charles Maxcy took down the HPO Toledo for $37,465 after a chop.
From there, Donald McArthur won the HPO Tunica for $17,100, Steven Gurney-Goldman took down the HPO Grantville Regional for $29,342, and Linda Lieder defeated Kyle Cartwright in heads-up play to win the 2015 HPO St. Louis Regional Main Event for $48,440. Most recently car dealer Loukas Michael won the HPO Charles Town for $35,803.
“These HPO tournament fields are such a great mix of traveling poker professionals and local promotion winners which makes the tournaments really attractive to all levels of poker players,” said Bill Bruce, who has served as the HPO tournament director since the tour’s inception.