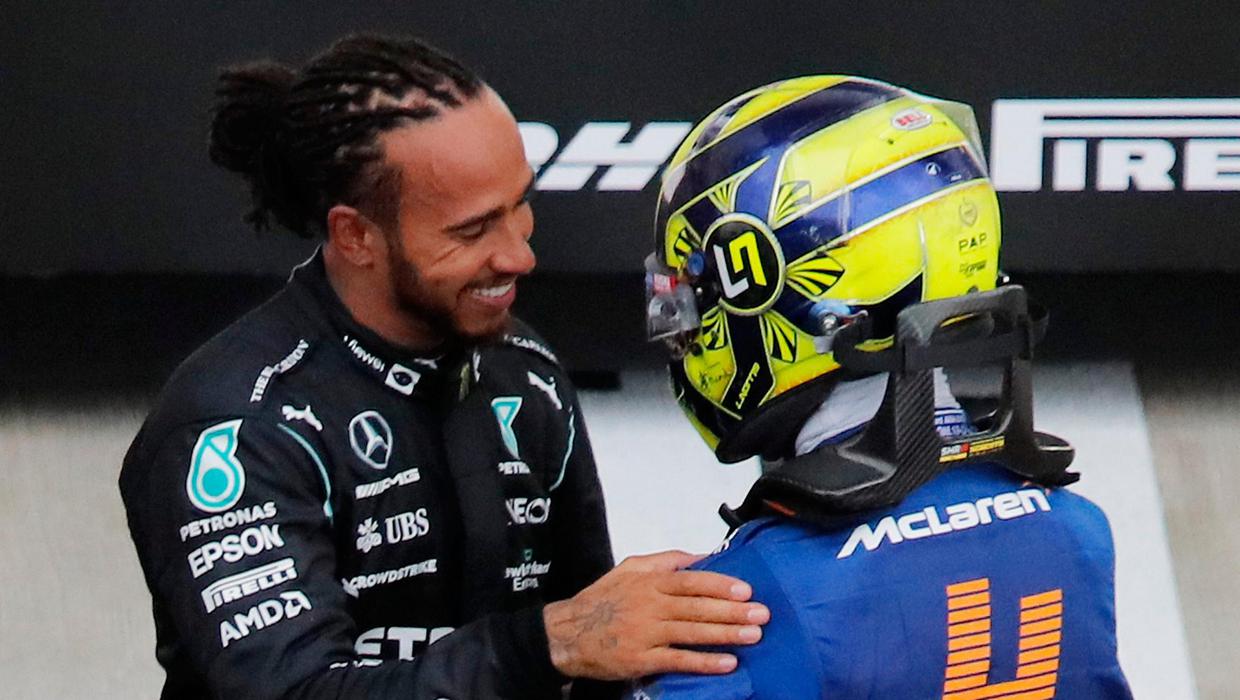 Lewis Hamilton claimed his 100th triumph at the Russian Grand Prix after a late rain shower prompted one of the wildest race finishes Formula One has ever seen.

The victory made Hamilton the first driver to 100 victories in F1 history and put him back in the lead of the championship over Max Verstappen, who capitalized on the late drama to finish second.

It came amid almost unbelievable scenes at the end of the race, as a late rain shower led to chaos. Hamilton had been chasing down longtime race leader Lando Norris, who decided to stay out on the dry tyre when Hamilton pitted for the intermediate.

Hamilton’s decision proved to be the right one as the rain intensified, with Norris quickly struggling to keep his car on the race track. By the time Norris pitted he had lost the sizeable advantage he and Hamilton had built up over the rest.

It was a heartbreaking finish for Norris, who had been just four laps away from the first victory of his Formula One career when the rain came.

The McLaren driver had to settle for seventh.

Remarkably, having started from 20th, Hamilton’s championship rival Verstappen managed to minimize the damage to his title race by finishing second. Verstappen had spent much of the race battling for sixth and seventh position but, like Hamilton, is considered a master of wet conditions and demonstrated exactly why he has that reputation.

Carlos Sainz finished third for Ferrari. Sainz led the first portion of the race having beaten Norris into Turn 2 but was left to rue the timing of Ferrari’s pit-stop as it seemed to relegate him out of contention for victory.

McLaren’s Daniel Ricciardo concluded fourth. McLaren was left to rue a slow pit-stop for the Australian driver mid race, but it was another strong performance for the Italian Grand Prix winner.

Hamilton’s teammate Valtteri Bottas finished fifth despite spending much of the race in the middle of the order. Like Verstappen, Bottas capitalized on the late rain with a well-timed pit-stop to carve through the field.

Fernando Alonso finished sixth ahead of Norris, who overtook Kimi Raikkonen on the final lap of the race.

Red Bull’s Sergio Perez finished a disappointing ninth. The Mexican driver had been on track for a podium finish before the rain shower. George Russell, who qualified in third position and run in the top three in the early part of the race, grabbed the final point in 10th position.

Aston Martin teammates Lance Stroll and Sebastian Vettel nearly had a nasty collision in the final laps. Stroll appeared to not see Vettel as he looked to overtake in the final sector of the circuit and nearly squashed the four-time world champion in the wall.  Stroll then tagged Pierre Gasly, who finished 13th. Charles Leclerc was also denied a top-five finish by the rain as he got caught out by the conditions late on and ran straight on at Turn 4.