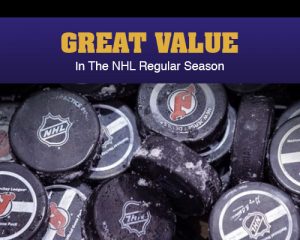 With just about 15 games to go in the NHL Regular Season, not surprisingly there are some legitimate favorites to hoist Lord Staley’s Cup that have emerged.
So who should we throw our money behind? Is one of the betting favourites destined to win it all or is there some value down the board?
Washington Capitals +450
We all know that the Caps are a terrific Regular Season team. The question remains Can they put it all together in the playoffs in an especially tough Eastern Conference?
The addition of Kevin Shattenkirk at the deadline was a serious boon and the play of Brayden Holtby has been terrific.
Because of him the Caps are the best defensive team in the game a crucial part of a successful playoff team.
Get all the latest Sports Betting updates on your social media outlets. Find us on Facebook!
Chicago Blackhawks+500
The Hawks are a top contender and rightfully so! This year they will be out to avenge a first round exit in last year’s playoffs.
A familiar face was added to the blueline at the deadline Johnny Oduya makes this team better all by himself! Experience, an enviable top two lines and a balanced attack have me thinking Chicago will win the West this year.
Minnesota Wild +600
The Wild have been at or near the top of the standings all season long – only a recent 4-6-0 string has them down to fifth in the overall standings.
This team has had some playoff success in recent years – they have reached the second round in two of the last three years and look poised to at least match that this year.
Pittsburgh Penguins +1000
The defending Champs are definitely in the running again this year. Sure they have had an almost unfair run of injuries but this team is still the top scoring team in the game.
They have lost only four times in Regulation on home ice all year, have terrific Special Teams and they have the most special player on the planet suiting up for them. This team is getting healthier and if Kris Letang can return he will be rested as the straw that stirs the Penguins drink. If Pittsburgh is your pick to win it all again it is great value at +1000.
When betting on the NHL, it can sometimes be hard to find value in a team that’s either heavily favored or is a major underdog on the moneyline. Luckily for us, most sportsbooks give us a puckline, which is the same idea as a point spread in sports such as football and basketball. The difference, of course, is that scores in hockey are much lower and the spread is almost always set at 1.5. This means that in order to cash a spread bet, a favorite must win by two or an underdog must not lose by more than one. As the regular season progresses into the Stanley Cup there is great value in some regular bets, find it at BetRegal.com.

Betting on the Masters Tournament