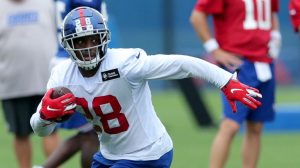 The New York Giants are reportedly set to part ways with veteran running back Jonathan Stewart.
Stewart signed a two-year deal with the Giants during the 2018 offseason, and there was a team option for the second year. With the Giants opting to not pick up the option, they will save about $2.5 million in salary cap space, per Ralph Vacchiano of SNY.
This move was to be expected by the Giants. With Stewart’s age, injury and the team’s need for salary cap space, Big Blue is parting ways with the veteran.
Stewart was a massive disappointment in his lone season with the Giants. After signing a two-year, $6.8 million contract last spring, Stewart logged just six carries for 17 yards before suffering a season-ending foot injury.
Stewart was brought in last March in an effort to add depth and experience to the Giants’ backfield. He couldn’t stay healthy and therefore was a swing and a miss by general manager Dave Gettleman.
Check BetRegal.com and find the best online betting site.
“We’ll go into this season because we have different issues,” Gettleman said. “One of the biggest issues we had last year that we had to fix was what? The locker room. And both Jonathan Stewart and Patrick Omameh are true professionals, and they were brought here for a specific purpose, they were brought here for other reasons than their play. Just understand that. We feel like we’ve turned that corner, especially with this rookie class.
Despite his struggles prior to getting injured, and rarely seeing the field as Offensive Rookie of The Year Saquon Barkley’s backup, Stewart believes he can still play.
Get all the latest Betting and Sport News updates on your social media outlets. Find us on both Facebook and Google+
“I think I still have gas,” Stewart said told NJ Advance Media last week on Super Bowl radio row. “It was disappointing. I’m not going to lie about that. But it was a season where God put me in a position to offer my experience and my assistance in different ways.”