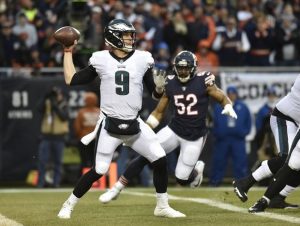 The Philadelphia Eagles needed help to get into the playoffs, and Chicago provided it.
Look how the defending Super Bowl champions repaid the Bears.
Nick Foles hit Golden Tate with a 2-yard touchdown pass on fourth down with 56 seconds remaining against the NFL’s stingiest defense, lifting the Philadelphia Eagles past the Chicago Bears 16-15 on Sunday in the final wild-card game.
Former Eagles kicker Cody Parkey hit the left upright and then the crossbar with a field-goal attempt from 43 yards with 10 seconds remaining, silencing the raucous crowd.
The key, of course, was how the Eagles, even when they are messing up, never give up. On Parkey’s kick, several Eagles said defensive tackle Treyvon Hester touched it.
“I think the big thing is, we saw some adversity tonight in the first half (and) I had a couple of turnovers,” Foles said. “I think the big thing is that no one loses faith, no one stops believing, everyone just keeps talking, keeps believing in one another, and we just rallied. Our defense really kept us in this game.”
Check BetRegal.com and find the best online betting site.
The defending league champion Eagles (10-7) squeezed into the playoffs by beating Washington and having the Bears (12-5) help them by knocking off Minnesota in the season finale. Philadelphia thanked its benefactor with a 12-play, 60-yard drive on which Foles, the Super Bowl MVP last February, hit six passes.
Tate made a reaching grab in the right side of the end zone near the goal line.
“We found a way,” Tate said. “That’s playoff football right there for you. That’s why we play this game for times like now once you get to January and February.”
Get all the latest Betting and Sport News updates on your social media outlets. Find us on both Facebook and Google+
Philly plays at New Orleans (13-3) next Sunday. Chicago’s sensational turnaround season from last place to the NFC North title is over.