Dodgers to 'take our time' with Verdugo injury 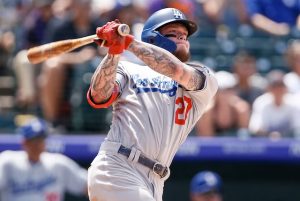 The Dodgers placed outfielder Alex Verdugo on the 10-day injured list Tuesday with a strained right oblique as their injuries continue piling up. Corner infielder and outfielder Edwin Rios was recalled from triple-A Oklahoma City to replace Verdugo on the roster.
Verdugo sustained the injury attempting to avoid a groundball on the basepaths Sunday in the Dodgers’ win over the Padres. Dodgers manager Dave Roberts indicated the rookie would likely miss at least two weeks.
Verdugo, 23, is batting .294 with 12 home runs and an .817 on-base-plus-slugging percentage while providing plus defense in the outfield. He joins Chris Taylor, Enrique Hernandez, David Freese, Ross Stripling and Rich Hill on the injured list.
“It’s more, you got to let it heal up and give it time for it to heal and then resume activities,” Roberts said. “So that’s the tough part when you’re talking about rotation, whether it be throwing or swinging a bat. So with Alex, we got to take our time and make sure we get this behind us.”
Check BetRegal.com and find the best online betting site.
Carter has kept his body in top shape throughout his career and maintained his ability to shoot from distance to help extend his time in the league.
Without Verdugo, who had settled into left field since center fielder A.J. Pollock’s return last month, the Dodgers will turn to a combination of Matt Beaty, Joc Pederson and Rios in left field. Beaty started in left field Monday and Tuesday against the St. Louis Cardinals.
The Dodgers are also closely managing Pollock since he suffered a groin injury last week. He was not in the lineup Tuesday for the fourth time in fifth games.
Rios rejoined the Dodgers on Tuesday for his second major league stint after a scorching stretch with Oklahoma City. The 25-year-old batted .342 with 10 home runs and a 1.265 OPS in his last 19 games. He went four for 15 with four walks in eight games for the Dodgers before he was optioned last month.
Get all the latest Betting and Sport News updates on your social media outlets. Find us on both Facebook and Google+
“He’s really taken to staying in the strike zone,” Roberts said. “We’ve had conversations about that when he was here. And he really took it to OKC. He’s getting on base, he’s slugging, using the big part of the field. So all those things we knew he was capable of doing.”