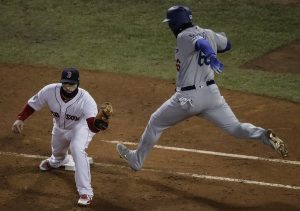 All season long, the Boston Red Sox have tried to recapture their World Series-winning form from 2018 with mixed results.
Perhaps a series against their Fall Classic opponent could finally light the spark.
The Red Sox come out of the All-Star break to host the Los Angeles Dodgers for a three-game set beginning Friday. The rematch is the first time the two teams have met since October, when Boston won the best-of-seven series 4-1 for its fourth championship since 2004.
“We’ll be ready for the Red Sox,” Dodgers manager Dave Roberts told reporters prior to the break. “No gathering or message to the team to rally the troops. We know what to do.”
The pitching matchup Friday will see Boston left-hander Eduardo Rodriguez (9-4, 4.65 ERA) take on Los Angeles right-hander Kenta Maeda (7-5, 3.76).
Check BetRegal.com and find the best online betting site.
Los Angeles ended the first half on a three-game skid but still leads the majors with 60 wins. The break served only to strengthen the team as shortstop Corey Seager and first baseman David Freese are off the injured list. Both were sidelined by left hamstring strains.
Offseason acquisition A.J. Pollock also is expected to return for the series. The center fielder is on rehab assignment with High-A Rancho Cucamonga as he looks to battle back from right elbow inflammation that has kept him out since April 28.
Boston, meanwhile, entered the break riding a four-game win streak. Still, its 49-41 record is well off its 61-29 mark through the first 90 games of last season, and the club’s only move over the break was parting ways with ineffective reliever Tyler Thornburg.
“I think for as bad as everyone says it’s been and this and that, if you really look at it, it hasn’t been that bad,” Red Sox slugger J.D. Martinez told reporters during All-Star media availability.
Get all the latest Betting and Sport News updates on your social media outlets. Find us on both Facebook and Google+
“Last year, in my opinion, was an extreme, and to have those expectations to come back and do exactly that, that’s pretty tough. I think we’ve done a really good job of giving ourselves a chance for the second half and putting ourselves in a position where we can make the playoffs.”

Dodgers get stronger as Seager returns