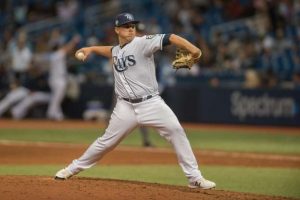 The Dodgers have acquired right-handed reliever Jaime Schultz from the Rays in exchange for right-handed pitching prospect Caleb Sampen, per a club announcement Tuesday.
Schultz, 27, had been designated for assignment last week when the Rays acquired well-traveled righty Oliver Drake from the Blue Jays. Schultz made his major-league debut in 2018, posting a relatively unimpressive 5.64 ERA and 1.15 WHIP with 35 strikeouts and 17 walks over 30.1 innings. It’s worth noting, however, that Schultz had 13 scoreless outings, including one where he allowed four runs while recording just two outs as “The Opener” during the final week of the season.
Schultz also struggled in the minors in 2018, posting a 5.75 ERA and 1.86 WHIP over 36 innings at Triple-A Durham. The former 14th-round pick had a decent track record in the minors prior to last season, though, with much of his success coming as a starter. He was converted to the bullpen prior to the 2017 season and has seemingly struggled with the adjustment.
Check BetRegal.com and find the best online betting site.
This type of deal has become increasingly common for the Dodgers over the past year as they’ve begun to make more of an effort to stay under the luxury tax. Last winter, they acquired lefty Scott Alexander — who had begun to gain some acclaim around the league, but was still rather unheralded — from the Royals in a three-way deal that also included the White Sox. Alexander went on to be one of the team’s most consistent relievers, leading the team with 73 appearances and posting a 3.68 ERA and 1.27 WHIP while holding lefties to a .172/.248/.212 slash line. They made a similar move in early July, acquiring 27-year-old righty Dylan Floro — who was in the midst of his first really effective season with the Reds — as part of a five-player deal. Floro went on to post a 1.63 ERA and a 1.05 WHIP over 29 appearances for the Dodgers. They’ll see if they can strike that type of magic once more now with Schultz.
Get all the latest Betting and Sport News updates on your social media outlets. Find us on both Facebook and Google+
Sampen, meanwhile, was a 20th-round pick out of Wright State in last summer’s draft. He struggled with the advanced rookie-level Ogden Raptors, throwing for a 5.04 ERA and a 1.31 WHIP, though his peripherals were encouraging — he struck out 43 and walked nine over 30.1 innings (13 appearances, including 11 starts).