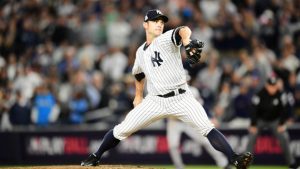 As the Philadelphia Phillies wait to find out if they will land Manny Machado and/or Bryce Harper, the front office found another way to improve its roster by signing one of the top free agents on the market.
According to Mark Feinsand of MLB Network, the Phillies have agreed to a two-year, $23 million deal with reliever David Robertson.
Robertson excelled for the New York Yankees in 2018, serving in a variety of roles as a late-inning reliever. He recorded a 3.23 ERA and 1.03 WHIP across 69.2 innings with 21 holds, eight wins and five saves.
According to the report, Robertson will receive $10 million in 2019, $11 million in 2020 and Philadelphia holds a $12 million club option for 2021. If the Phillies decline the team option, Robertson will receive $2 million for the buyout.
Check BetRegal.com and find the best online betting site.
“The Phillies are a great organization, and they have that hunger to get back in the postseason and they’re going in the right direction,” Robertson said. “It’s a place where I’ll get a lot of opportunities to pitch in the back end of the bullpen and I don’t see any reason why we can’t get in the postseason.”
“He’s going to pitch high-leverage innings for us,” Phillies general manager Matt Klentak said of Robertson. “That’s what he’s done very effectively and consistently for a long time. The fact he has experience pitching the ninth inning is very appealing for us.”
Get all the latest Betting and Sport News updates on your social media outlets. Find us on both Facebook and Google+
Robertson had quality regular-season splits that were almost identical pre- and post-All-Star break, a testament to his consistency. He excelled at helping get leads to closer Aroldis Chapman, who had 32 saves in 34 chances last season. Robertson’s WHIP ranked seventh among AL relievers who pitched at least 60 innings, and opponents hit .183 against him.