Crossing States Lines: Will the Chips Falls Where They May in a Good Way? 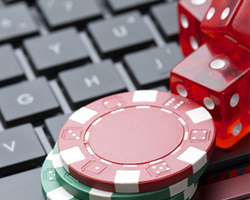 The United States has no federal internet gaming regulation, more popularly known as iGaming initiatives. That means each state must decide how to regulate iGaming, or Congress must regulate iGaming federally.
Sands casino giant Sheldon Adelson vows to spend as much money as needed to ban iGaming on a federal level and that ban includes poker, which up until recently was not included in talks of banning because it is a game of skill.
But because of Adelson’s proposal to federally ban iGaming, U.S. online poker players may soon find themselves without any online options, no matter where they live.
State Statuses
Until recently, many people believed that because Adelson donated so heavily to the Republican Party, no Democrats would ever support his proposed federal ban.
Many people also believed that the revenue each state stood to make would be enough to convince each state to legalize and regulate iGaming without supporting a federal ban, as well as to enter into interstate agreements that legalized revenue sharing. This seems logical, especially among states that stand to make millions of dollars from online wagers. One such state is California.
But California Democrat Diane Feinstein recently crossed party lines by showing her support of Adelson’s bill. And even if California decides to legalize and regulate iGaming, the state appears uniterested in sharing its revenue.
Furthermore, Pennsylvania overall leans toward supporting the legalization of online iGaming. But despite this statewide support, Adelson made the most of his economic ties to the state by getting Pennsylvania Rep. Mario Scavello to lend support to a bill that criminalizes betting online. While that criminalization bill is unlikely to pass, it still slows down the progress of iGaming in a state that for all purposes supports the legalization of iGaming.
If you want to know how the poker chips fall where you live, contact your lawmakers to find out which way your state leans, and to learn about recent iGaming developments where you live.
Details on What You Can Do
According to John Pappas, the Executive Director of the Poker Player Alliance (PPA), August is the perfect time to reach out to lawmakers about how you want to play online poker and do not support the Adelson proposed ban. That’s because August is when lawmakers leave Washington and return home to review what’s important to their constituents.
Therefore, reach out to your lawmakers by making phone calls, writing emails, Facebooking and Tweeting them about your love of online poker, and your support of its legalization and regulation. Keep in mind that when Congress returns to Washington, they will listen to a hearing about this ban so time is of the essence.

Is Poker entertainment or Business?