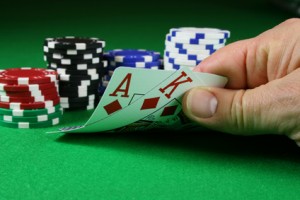 Check Regal Poker for Latest Poker News, poker strategy tips and more.
(pokernews.com)- Cory Bogert topped a field of 257 entries to win the Hollywood Poker Open St. Louis Regional Main Event. Among those Bogert defeated from the field included HPO ambassador Chris Moneymaker, six-time World Series of Poker Circuit ring winner Kyle Cartwright, and hometown hero Josh Turner.
Bogert took home $41,690 as part of a three-way deal he made with Jeremy Scharf and Lloyd Ney. Additionally, he earned a $2,500 seat into the HPO Championship Event to be held at the M Resort in Las Vegas this June.
Learn everything that you need to know about how to play poker, and become a professional in Blackjack and Texas Hold’em

*Denotes a three-way deal.
Bogert had strong play throughout the final day after he entered third in chips with 203,500. He came into the final table in the middle of the pack, but quickly exploded to take the chip lead during five-handed play.
Prior to this result, Bogert had only two recorded cashes, but he told PokerNews that he was a tournament pro at 17, playing online. He now says he spends most of his time playing cash games and a very few select tournaments. This was one of those few selections, and wouldn’t you know it, he won the whole thing.
He plans to be be playing in the $2,500 Championship Event in Las Vegas in June.
Bogert scored the elimination of Michael Kamenjarin in eighth place when his pocket eights were able to spike a set against the pocket queens of Kamenjarin.
At the start of the final table, Don Baumer held the lead, but it turned out to not be his day. Several double ups were had through him, and the next thing Baumer knew he was on the rail thanks following a huge clash with Bogert.
Bruce Mead then fell in fourth, and the final three players agreed to a deal. After the deal, Ney busted in third, then Bogert finished off Scharf in second to officially win the event and the $2,500 Championship Event seat.
For Moneymaker, the 2003 WSOP Main Event champion who now serves as the official HPO ambassador, he busted just outside the money in this event, but it was certainly a wild ride. On Day 1a, Moneymaker joined the tournament very late thanks to a deep run in a $300 side event where he took third for $4,575. Moneymaker then started play in the Regional Main Event at the beginning of Level 9.
He began with 20,000 in chips and quickly ran it up to 140,000 in about an hour. He had hopes of being one of the chip leaders advancing to Day 2, but had his aces cracked by Peter Brooks for a huge pot at the end of the night. On Day 2, he tried to get things going, but couldn’t, and busted when he missed a flush draw to stay alive.
Turner, who bagged up the Day 1b chip lead, finished in 18th place for $3,213 in this event. Because of his success at the HPO St. Louis stop this year, Turner topped the points leaderboard that earned him a $2,500 Championship Event seat. This marks the third straight year Turner has won this leaderboard.