Colts say Luck out at least another week 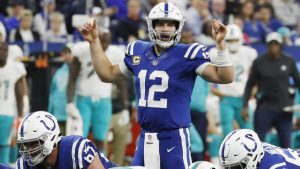 Indianapolis Colts quarterback Andrew Luck will miss at least another week of practice during the team’s training camp as he continues to recover from an injured left calf suffered in April, Indianapolis head coach Frank Reich said Saturday, per ESPN’s Mike Wells.
“Make no mistake, Andrew is driving the truck here,” Reich added. “He knows how he feels. He knows best what is going to get him ready.”
A calf injury limited Luck throughout the offseason dating back to May, causing him to miss minicamp and the start of training camp.
The team noted it was being extra conservative with the injury, simply scaling back his workload and avoiding practice, per Tom Pelissero of NFL.com.
At the time, Luck was just “not ready to take the next step,” Reich told reporters when the quarterback was shut down to start training camp.
Injuries remain an issue for the 29-year-old, who missed all of 2017 with a shoulder injury. A lacerated kidney also cut his 2015 season short.
Check BetRegal.com and find the best online betting site.
However, he stayed healthy throughout the 2018 campaign and looked like his old self on the field, throwing 39 touchdowns with 4,593 passing yards and a career-high 98.7 quarterback rating.
The Colts are relying on him to continue this level of production going forward, and it makes sense for Indianapolis to be cautious now to avoid another injury slowing him down in the regular season.
Backup quarterback Jacoby Brissett has shown he can handle the starting job if needed, and Wells reported the 26-year-old has been working with the first unit, although Indianapolis will hope Luck is back on the field as soon as possible.
The Colts already have ruled Luck out of the Aug. 8 preseason game at Buffalo. The team would like for him to get some snaps in a preseason game, but there’s no rush to get him back on the field. The Colts open the season in five weeks on Sept. 7 at the Los Angeles Chargers.
Get all the latest Betting and Sport News updates on your social media outlets. Find us on both Facebook and Google+
One of the reasons why Luck is taking his time in returning from the calf injury is because he admitted recently that he still has “emotional scars” that “lives with me still” from the right shoulder injury that cost him the entire 2017 season.