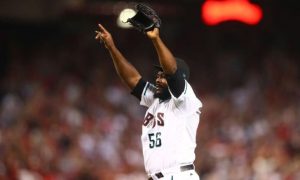 Rodney reached a one-year, $4.5 million deal with the Twins on Thursday, Craig Mish of SiriusXM reports.
Rodney’s deal offers incentives that could bring the value up to $6 million, as the 40-year-old will move on to his ninth different major-league team since breaking into the big leagues in 2005 with Detroit. During this past season with the Diamondbacks, Rodney posted a 4.23 ERA and collected 39 saves, which ranked in the top five in the majors, and were his most since recording 48 in 2014. Moving forward, he will be the primary closer in Minnesota for this upcoming campaign, and could very well wind up earning a similar number of saves given the opportunity.
Check BetRegal.com and find the best online betting site.
Rodney turns 41 on March 18 and will be in his 16th major league season. Well-known for firing an imaginary arrow to celebrate the final out of wins. For his career, Rodney is 44-63 with 300 saves in 828 relief appearances for Detroit (2002-03 and 2005-09), the Los Angeles Angels (2010-11), Tampa Bay (2012-13), Seattle (2014-15), the Chicago Cubs (2015), San Diego (2016), Miami (2016) and the Diamondbacks last year.
Rodney has maintained a double-digit whiff rate for five of the last six years, with his last two years checking in over 12 percent — above his career rate of 11.5 percent. Rodney gives the Twins protection on the back side of their bullpen, and something they don’t have much of in terms of strikeouts and velocity. It’s a savvy pickup.
Get all the latest Betting and Sport News updates on your social media outlets. Find us on both Facebook and Google+
The Twins also lost two pitchers in the Rule 5 draft. Nick Burdi was selected with the third overall pick by the Phillies, and subsequently flipped to the Pittsburgh Pirates for international slot money. Luke Bard was selected later in the round by the Los Angeles Angels of Anaheim.

Zeke's returns to practice with Cowboys