Clippers holding on to playoff spot as Lakers fade 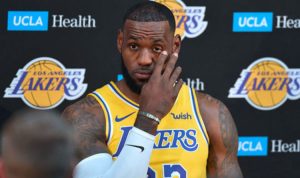 The Los Angeles Lakers were expected to make a playoff push when LeBron James returned from injury a month ago, but they’re still heading in the wrong direction.
The Lakers are 4-7 since James returned from a 17-game absence because of a groin injury, and they’ve lost four of five heading into a pivotal matchup Monday night against the visiting Los Angeles Clippers.
The Lakers are 4 1/2 games behind the eighth-place San Antonio Spurs and five games back of the Clippers in the Western Conference. The Lakers have 19 games left, the Spurs 18 and the Clippers 17.
“It’s just unfortunate, with the opportunity that we’ve had, we haven’t been able to seize that opportunity,” James said after a particularly frustrating loss Saturday night at the Phoenix Suns, one of two NBA teams with just 13 wins.
The Lakers have made a habit of falling into an early hole in games and then trying to claw out in the fourth quarter. They’ve won 10 games this season in which they have trailed by 10 or more points.
Check BetRegal.com and find the best online betting site.
Los Angeles trailed the Suns by 19 points in the fourth quarter on Saturday before cutting the deficit to five with just under four minutes left. James missed two free throws that would have pulled the Lakers within three with 47.4 seconds left and the Suns held on for a 118-109 victory, just their third win since Jan. 12.
“I am happy with the fight we showed in the fourth quarter, but with where we’re at in the season that’s the desperation we need to start the game with,” Lakers coach Luke Walton said.
James said he doesn’t bother looking at the standings, mainly because they’re so fluid from day to day.
The Clippers are playing the second of eight straight games at Staples Center, but coach Doc Rivers told Fox Sports Prime Ticket before the win against New York that now’s not the time to get comfortable.
Monday’s game against the Lakers is their only game as the visitor in the teams’ shared home.
Get all the latest Betting and Sport News updates on your social media outlets. Find us on both Facebook and Google+
“Just because you’re at home, you still play tough teams,” Rivers said. “The bottom line for us, we have to win games. … We have not played great at home, so let’s turn that around.”

Bryce Harper gets record deal with the Phillies