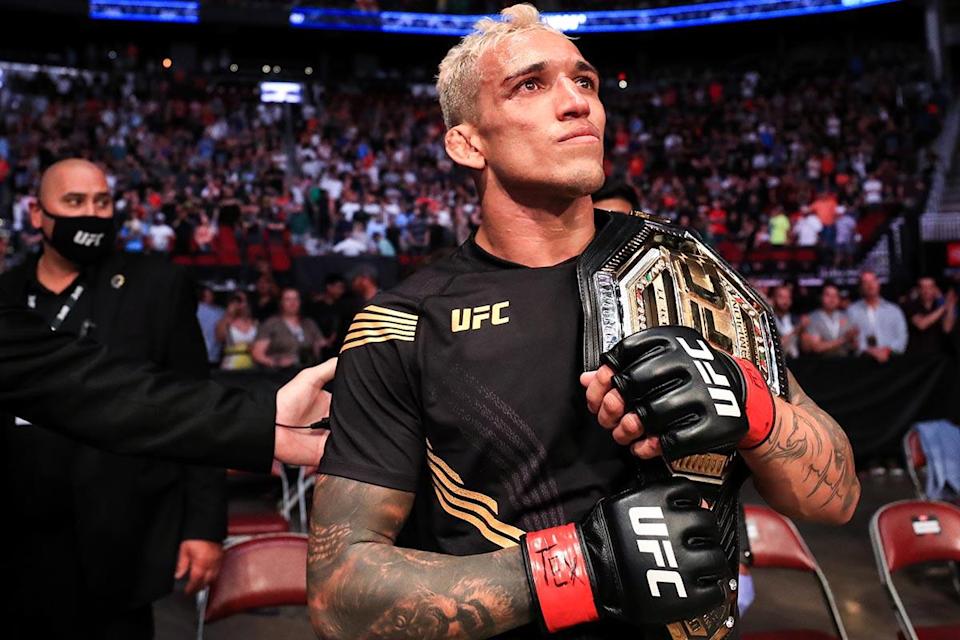 It took more than 10 years, a failed drop in weight class and more than his fair share of ups and downs, but Charles Oliveira is lastly a UFC champion.

Oliveira finished Michael Chandler via TKO at 19 seconds of the second round Saturday night in the main event of UFC 262 at Toyota Center. With the triumph, Oliveira captured the vacant UFC lightweight title.

“I told you I was going to knock him out, and I came and knocked him out,” Oliveira said in his postfight interview through an interpreter. “I proved to everybody I’m the lion of lions.”

In the opening seconds of the second round, Oliveira dropped Chandler with a left hook and then poured it on with strikes on the ground. Chandler tried his best to get away, but he could not. Oliveira landed until referee Dan Miragliotta pulled him off, ruling it a TKO.

Oliveira quickly climbed out of the cage to celebrate after the finish and came right up to UFC president Dana White.

At the postfight news conference, White said Oliveira told him, “Thank you for everything you’ve done for me. Tonight was the biggest opportunity for my life.”

“That was an incredible main event,” White said. “Both guys had an unbelievable performance in that fight. Oliveira pulled it out.”

He relinquished the lightweight title earlier this year when the retirement was made official. Nurmagomedov had been UFC lightweight champion since April 2018.

Oliveira (31-8, 1 NC) has won nine in a row and is acclaimed as one of the best submission artists in MMA history. The Brazil native has the most submission victories ever in the UFC (14) and the most performance bonuses in promotion history (10). He now has the most finishes in UFC history (16). He is 10-1 since coming back to lightweight after a disastrous stint at featherweight.

“Michael, you’re a great champion,” Oliveira said. “But today was my day. Favela, it is ours.”

Chandler (22-6) had won three straight coming in, including an emphatic, first-round TKO victory over Dan Hooker in his UFC debut at UFC 257 in January. That finish proved he was more than for real, which many who follow the sport closely had known for years.

The Missouri native is a former three-time Bellator lightweight champion and owns wins over former UFC champions Benson Henderson and Eddie Alvarez. Chandler, 35, holds the record for the most finishes in Bellator history (13). “We’ll get this one back,” Chandler said. “We’ll win this one back, eventually.”