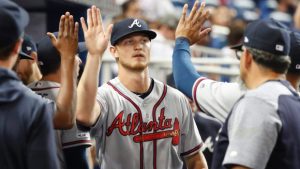 Atlanta Braves pitcher and Calgary native Mike Soroka has been named a National League Rookie of the Year finalist.

Soroka was declared as one of the top three vote getters for Rookie of the Year, as voted by the BBWAA. He joined New York’s Pete Alonso (the heavy favorite) and San Diego’s Fernando Tatis Jr.

After his 2018 debut season was cut short after five starts, Soroka emerged into an ace during his first full season. Despite missing spring training due to a shoulder issue, the 22-year-old made 29 starts. Soroka posted a 2.68 ERA – including a 1.54 road mark that led the majors – and earned a 142:41 strikeout-to-walk ratio in 174-2/3 innings.

Opponents hit .236 versus the Canadian righty, which includes a .203 average for right-handers. Hitters posted a collective .288 on-base percentage versus Soroka.

Formerly the organization’s top pitching prospect, Soroka became the long-awaited arm to pop in a deep farm system. He made one start in the postseason, allowing one run over seven innings in St. Louis, the best playoff start for a Braves pitcher since the Maddux-Smoltz-Glavine days.

Alonso built his own special season in the country’s biggest market, hitting a rookie record 53 home runs for a Mets team that turned around a lackadaisical season to win 86 games. Tatis was electrifying, hitting .317/.372/.590 with 22 homers, 53 RBIs and 16 steals in 84 games.

Voting for season awards took place before the postseason. The NL Rookie of the Year winner will be announced Nov. 11.

He had the lowest ERA among NL rookie starters and ranked fifth in strikeouts (142). Soroka also made the all-star team and reached ace status with the Braves.

His 5.6 WAR, measured by Baseball Reference, was second on Atlanta (behind only Josh Donaldson) and first among NL rookies.