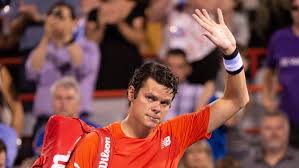 Canada will not have Milos Raonic for the inaugural Davis Cup Finals next week in Madrid due to a back injury.
He missed the U.S. Open because of a back injury and has played just three official matches this fall.

“It is very hard and disappointing for me that I will not be able to represent my country at Davis Cup,” Raonic said in a announcement issued by Tennis Canada.

“My health has continued to let me down through this entire year and now once again. I will take the appropriate time to get healthy and I look forward to being back on court next season.”

Raonic has played Davis Cup just once in the last five years, since the first round in 2015. That was a playoff tie at home in Toronto in 2018.

Even with Raonic out, Canada have a strong crew with world No.15 Denis Shapovalov and fellow youngster Felix Auger-Aliassime, ranked 21st, both making the trip.

Canada are one of 18 nations contesting the first edition of the Davis Cup since its radical revamp. Canada faces Italy on Nov. 18 and the United States on Nov. 19 in group play. The winners of the six groups and the next two best teams advance to the quarterfinals.

The 28-year-old former world No.3 will be replaced by 94th-ranked Brayden Schnur for the week-long event in Madrid. Schnur has climbed 100 ranking spots this year to No. 94.

“I’m very happy to be able to play in the Davis Cup Finals but, of course, I first want to wish Milos a speedy recovery,” Schnur said. “It’s an honour for me to represent Canada in this team competition.”