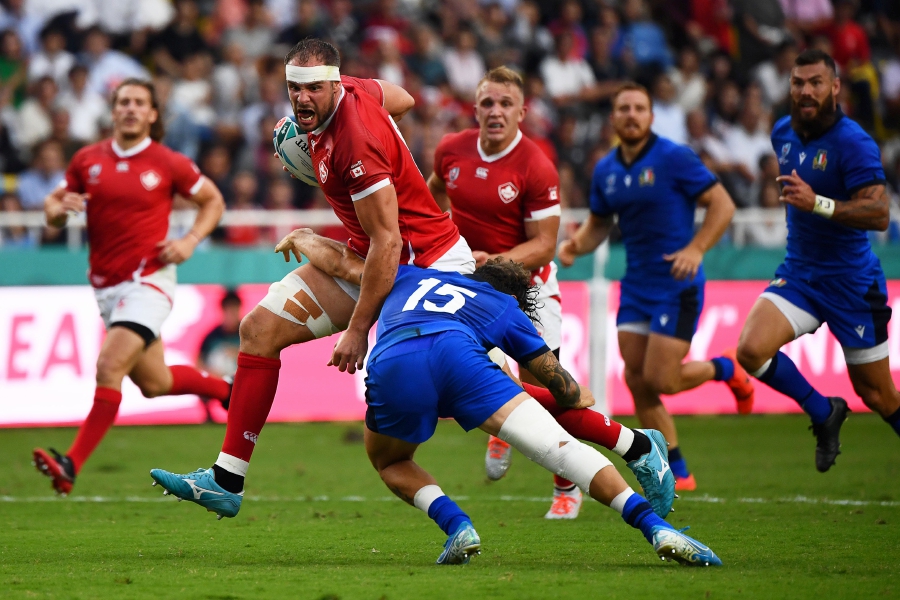 TOPSHOT – Canada’s number 8 Tyler Ardron (2L) evades Italy’s full back Matteo Minozzi (C) as he runs towards the try area prior to Canada missing a goal opportunity during the Japan 2019 Rugby World Cup Pool B match between Italy and Canada at the Fukuoka Hakatanomori Stadium in Fukuoka on September 26, 2019. (Photo by GABRIEL BOUYS / AFP)

With Typhoon Hagibis closing in, the Canadian rugby team left to bed Saturday with three possible scenarios for its final Pool B match versus Namibia at the Rugby World Cup in Japan.

Go ahead as scheduled with the 12:15 p.m. start (local time) Sunday in Kamaishi, delay the kickoff or cancel the game.

It turned out to be Plan C, with Canada coach Kingsley Jones meeting with captain Tyler Ardron and team manager Alana Gattinger in his hotel room just after 6 a.m. Sunday to plan their next move in the wake of World Rugby’s decision.

Canada will leave winless for the second straight contest, with the weather tying its hands this time.
Check BetRegal.com and find the best online betting site.

“We’ve grown throughout the competition but for us we wanted to get that win. We wanted to win a game at the World Cup — at a minimum,” a disappointed Jones said in an interview. “It would have been a tough opponent today but a team at the same level as us.”

Canada, ranked 22nd in the world, and No. 23 Namibia were the lowest-ranked teams at the 20-country tournament.

The Canadians, the last team to qualify 11 months ago via a repechage, had targeted the Namibia match. Namibia looked to snap a record 22-loss streak in Rugby World Cups over the last 20 years.

Outgoing Namibia coach Phil Davies was happy to take the two points received for a default draw for the cancellation.
The Canadian men, who went 0-4-0 at the 2015 tournament, have not won a game at the World Cup since a 25-20 win over Tonga at the 2011 competition. They have lost their last eight tournament matches, outscored 387-87 in the process.

Get all the latest Betting and Sport News updates on your social media outlet. Find us on Twitter
Canada is now riding a 10-match tournament winless streak dating to 2011 when it lost to France and New Zealand and tied Japan after beating Tonga.