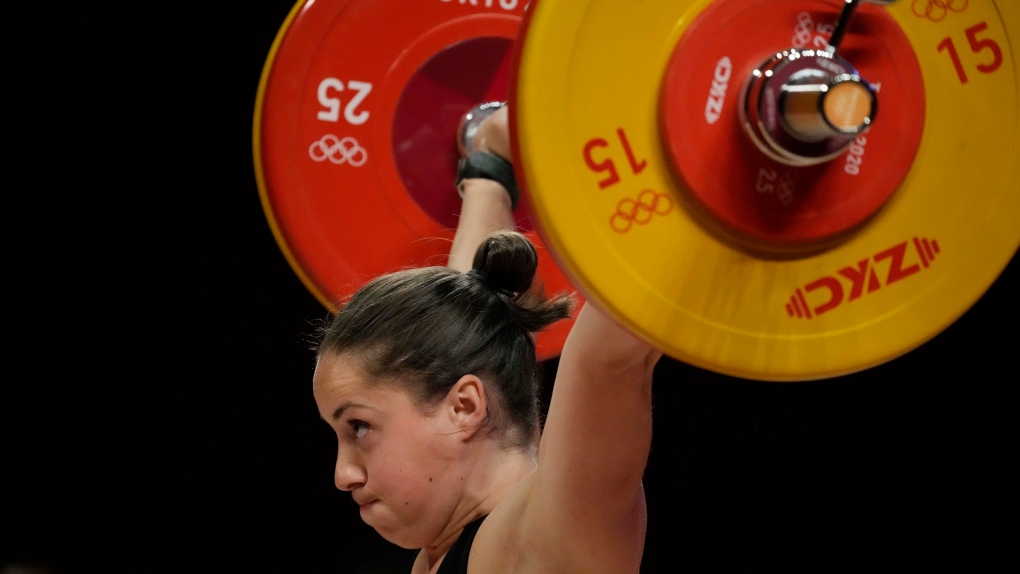 Maude Charron has won a gold medal in the women’s 64-kilogram weightlifting.

She lifted 105 kg in the snatch, and 131 in the clean and jerk to collect Canada’s second gold medal of the Tokyo Games.

Charron led the field after the snatch portion of the event, and waited as her competitors pushed the barbell weight heavier and heavier through the clean and jerk.

She initially declared 122 kg for her clean and jerk, but went to 128 on her first attempt but lost her balance and failed.

The Rimouski, Que., lifter didn’t have much time to recover, immediately getting back on the clock as the last remaining competitor at 128 kg. Having used up much of the two-minute clock, Charron made no mistake on her second attempt, lifting 128 kg and vaulting herself into the lead.

After Great Britain’s Sarah Davies upped her third declared weight to 133 kg — meaning she stated she would lift at least that to reach the podium — Charron was on the clock to lift 131 for her last shot of the competition, despite already being in the lead.

Charron, 28, got emotional on the podium as O Canada filled the Tokyo International Forum.

“Actually I don’t remember,” Charron said with a laugh when asked about the anthem. “I was just crying, and I didn’t realize what happened.

“I thought about my grandmother because once she told me she’d like me to sing the Canadian anthem, so I sang it — but on the podium at the Olympics.”

This is Canada’s second Olympic gold medal in weightlifting, after Christine Girard achieved in the 63-kg division at the London 2012 Games.

Girard didn’t get to hold her gold medal at the London Games, or hear O Canada, as she was awarded the gold in 2018 after two competitors retroactively tested positive for performance-enhancing drugs.

“I think [this gold medal] was due to Canada for some time,” Charron said, adding she wished her family could have been there to see her victory in person. “With Christine Girard, I was thinking a lot about her. I think it’s a medal that’s due to us.”