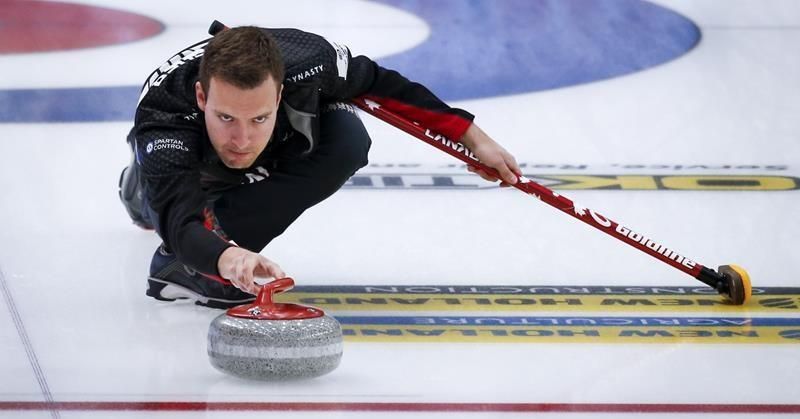 An unexpected steal and a force put Canada’s Brendan Bottcher in the situation he wanted against Switzerland on Sunday at the BKT Tires & OK Tire World Men’s Curling Championship.

Tied with hammer in the extra end, an untimely miss proved costly in his first loss of the competition.

Bottcher was light on his final draw to give up a steal of two as Peter de Cruz pulled out a 6-4 triumph at the Markin MacPhail Centre.

“It’s a shot I’d like to have more often than not,” Bottcher said.

His Edmonton-based team of Darren Moulding, Brad Thiessen and Karrick Martin caught a break when Swiss fourth Benoit Schwarz had his first stone pick in the ninth end.

That shut down hope for a Swiss deuce and Schwarz’s angle-raise double effort to blank was just wide, giving Canada a steal and a 4-3 lead.

Bottcher forced Schwarz to hit for one in the 10th to set things up nicely in the extra end.

However, with a stone on the centre line at the top of the four-foot ring, Bottcher had to throw a little wider than usual.

“At the end of the day I think we knew the right time, I just threw it a little bit light.”

Bottcher, who had the lowest percentage of the eight players at 78 per cent, gave up two early steals versus De Cruz but pulled even with a deuce in the seventh end.

“I think we could have done a few things better that game but it’s a long week,” Moulding said. “You’re going to make mistakes.

“I don’t know if going through this event at 15-0 is a realistic thing either. You take the loss and move on.”

Canada bounced back in the afternoon draw with a 7-6 triumph over winless Dutch skip Jaap van Dorp.

Moulding stated he suffered some minor bruising in the knee area after sliding out of the hack in the fifth end. He stayed in the game and didn’t seem bothered by it. Moulding, who pulled out of last month’s mixed doubles playdowns after suffering back spasms, said his back “feels awesome.”