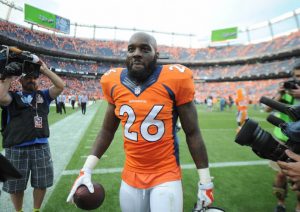 On Tuesday, the Buccaneers signed veteran safety Darian Stewart to address a position that has been hit by a run of injuries. A former Pro Bowler and a starter on the 2015 Denver Broncos team that won Super Bowl 50, Stewart not only adds depth but a wealth of experience. Over nine NFL seasons he has played in 130 games with 91 starts, including 58 starts for the Broncos over the past four years.
To make room for Stewart on the 90-man camp roster, the Buccaneers waived rookie defensive lineman Dare Odeyingbo.
Tampa Bay has already placed two safeties, Orion Stewart and D’Cota Dixon, on injured reserve. Incumbent starter Justin Evans remains on the active/physically unable to perform list and has yet to practice in training camp. Rookie Mike Edwards, who had been running with the first-team defense and was a starter in last Friday’s preseason opener, is currently out with a hamstring strain. Safety Kentrell Brice, a free agent pickup this past spring, _is_ practicing but he left Friday’s game early with an ankle injury. The Bucs have also signed a pair of undrafted rookie safeties in the past week – Micah Abernathy and John Battle – but Stewart is obviously the more proven NFL player.
Check BetRegal.com and find the best online betting site.
Stewart (5-11, 204) began his NFL career in 2010, signing with the St. Louis Rams as an undrafted free agent out of South Carolina. He made the team and appeared in 13 games as a reserve in his rookie campaign before moving into a starting role early in 2011. He opened 13 games that season and recorded a career-high 77 tackles along with 3.0 sacks, one interception and 11 passes defensed. Injuries limited Stewart over the next two seasons in St. Louis, and he signed with Baltimore as a free agent in March of 2014.
After one season as a starter for the Ravens, Stewart then signed with the Broncos, taking over at free safety and helping the team make a successful run through the playoffs, ending with the 24-10 win over Carolina in the Super Bowl. After starting those four aforementioned seasons in Baltimore, Stewart was released this past March.
Get all the latest Betting and Sport News updates on your social media outlets. Find us on both Facebook and Google+
Stewart’s career totals include 439 tackles, 5.0 sacks, 16 quarterback hits, 11 interceptions, 45 passes defensed, six forced fumbles and seven fumble recoveries. He had 60 tackles and two interceptions in 14 games last season. Stewart, who made the Pro Bowl following the 2016 season, has also played in and started five postseason games, notching two interceptions and a sack.